To the market again. A surfeit of lockdown pets. Socialising dogs and babies.

At this time of year it’s always touch and go whether or not I am going to cycle to Uppermill market on a Wednesday morning. Well, truth to tell, it’s always touch and go as around here it can be bucketing down with rain in July or August just as much as in November or December. In this latter part of the year, though, there’s the cold factor to take into account as well.

But when I got up the sky was relatively clear and my weather app said it would be fine with a gentle breeze. So I wrapped up a bit and put on my light weight rain jacket, just in case. I felt somewhat betrayed, therefore, when it started to rain lightly as I left the Italian greengrocers. And this was even more the case when I stood at the cheese and biscuit stall and the heavens opened, proper Galician-style downpour transferred to Saddleworth. Fortunately the biscuit lady had had the foresight to put up her waterproof awning and I was able to shelter. And it was over in minutes. Consequently my ride home was uneventful.

The fishman and the fruit and veg man were indulging in a bit of banter, as often happens. Indeed, fishman’s daughter told me, raising her eyebrows and rolling her eyes heavenwards, that they do this all the time and that they phone each other several times a week and rabbit on about anything and everything for up to two hours at a time. I suppose there are worse ways to spend your time.

Dog walkers were out in force this morning, especially on my way home along the Donkey Line. Maybe they saw the brief rainstorm and decided to take advantage of the ensuing dry and even sunny bit of the day. Some seem to be professional dog walkers with several dogs on leads. Or maybe they’re just people who like to have their house full of dogs. Not my idea of heaven, but … each to their own.

Apparently many of the people who acquired dogs during lockdown are giving them to rescue centres or in some cases just abandoning them. Now that people are returning to the office the dog has become an encumbrance. And, besides, these are dogs that have never had to get used to being left alone for hours while their owner goes out to work. It’s not just dog either. Animal rescue workers report abandoned rabbits, kittens, parakeets, even an iguana and a python! Those people, fair weather pet-owners, should have taken up a hobby instead - painting, drawing, all kinds of arts and crafts - but in many cases what they wanted was company. And that’s part of the problem with the dogs: they apparently haven’t had enough varied company to become really socialised.

“We think about one and a half million extra dogs were acquired in the last 18 months,” says Adam Clowes, the Dogs Trust operations manager. “These people got dogs in a very strange time. They weren’t able to introduce their dogs to other dogs in the park, they weren’t able to access good-quality training classes, veterinary care was limited. So we’ve got a whole cohort of dogs that started life in not the real world, and as life starts to return to normal those dogs and their owners are struggling to cope.”

Young mothers with babies born in lockdown have the same sort of problems. Not only have the new arrivals not been passed around from grandma to grandpa to doting aunt and uncle, but they haven’t been to the socialising groups where sitting-up babies don’t exactly play together but get used to the idea of other small people being around and maybe pinching their rattles. It is of course more difficult to send an anti-social baby to a rescue centre or to sell it on the internet ( which is just as well, really! ) but babies are mostly quite adaptable and most of them do learn eventually. It’s probably the reception class teachers who will have the hardest time of it when this cohort starts school. 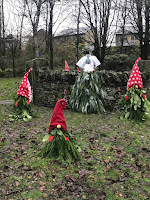 In the meantime one of our local schools seems to be managing to get their small charges to work cooperatively. Out walking  yesterday we spotted the work of Dobcross schoolchildren, getting one part of the village into the Christmas mood.