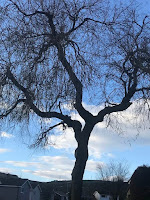 We walked out yesterday in the early afternoon, trying to catch a bit of winter sunshine. We saw some interesting winter skies, and some sunshine on the distant hills. We did actually see some sunshine as we walked back down the hill to home. 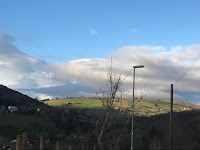 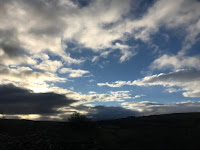 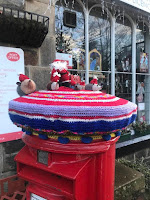 The post box outside the post office in Dobcross has been nicely decorated once again by the mystery crochet club, this time with a Christmas theme.

As we came down the last stage of the hill from Dobcross we saw a chap trying to catch a photo of a deer at the top of the slope. If he managed to get a picture he must have a better camera than mine, or at least one with a more powerful zoom facility.

He pointed out a fallen tree in his garden. It was blown down during Storm Arwen. After it had fallen, he told us, they discovered its hollow trunk was full of honeycombs. So they have consulted a bee expert, or at any rate a chap who keeps bees, who has recommended that they cover the tree with tarpaulins, hoping to keep the bees alive and warm until the Spring when the beekeeper will try get them into hives. We need to protect the bees.

As we walked Phil reflected on whether or not we are officially in Winter yet. It’s quite hard to tell as the weather does not divide the year up,into nice bitesized chunks. I thought it had something to do with solstices and so I did a little research.

In the Northern hemisphere we can sort of divide the year according to equinoxes and solstices. At the equinoxes, as the name implies, day and night are more or less the same length. We have the Spring Equinox around the 20th of March and the Autumn Equinox around the 22nd of September. In between times, about half way between them, we have a couple of solstices, appropriately enough known as the Winter Solstice (around December 21st - the deep Midwinter) and the Summer Solstice, around June 21st (Midsummer’s Day) . If we were druids, we would know his stuff already. The solstice marks the point when the Sun crosses the Equator’s path and becomes positioned exactly above the Equator between the Northern and Southern Hemispheres.

Now if the Autumn Equinox marks the beginning of Autumn and we think of each season being about three months, then Winter proper only begins at the Winter Solstice. Which explains why January and February often seem a lot more wintery than December! That means Winter is just now beginning. So we should not sing ‘In the deep Midwinter” at Christmas time at all. Maybe we should rewrite the carol:

At the beginning of Winter

To confuse matter further there is the little matter of the Equilux - more Latin-based terminology - “equal light”. We see the sun as a disk in the sky, the top,half popping up over the horizon before the centre. Because the sun’s light is refracted by the atmosphere we don’t actually get perfectly equal division of light and dark on the equinox. Day and night are of equal length a few days before the Spring Equinox and a few days after the Autumn Equinox.

Goodness! All that from a simple question: Are we officially in Winter yet?