Today began bright and crisp, not too cold, some blue in the sky. The sun tried to come out later but it wasn’t very successful. However, it’s a fine day. How long it will stay fine remains to be seen. (Later - it became dull and damp!)

Running round the village his morning, as I approached the old millpond I saw a fox running across the field. He kept stopping to look back and I could hear a few dogs barking. I hoped against hope there wasn’t a hunt in progress. We did see one once years ago when we lived at Slackcote in the valley between Delph and Denshaw. Thankfully this morning it was just a few local dogs barking, no hunt going on. The fox went on his way, too far away on the other side of the field for me to catch a photo of him. He lived to make his foxy mayhem another day. Some will not be so lucky. I read this is one of yesterday’s papers:

“A scaled-back Boxing Day trail-hunting programme will go ahead this year despite the worsening Covid situation and growing calls to ban the practice on public land, the Countryside Alliance has said.

The majority of Boxing Day hunts are due to go ahead on 27 December because this year’s holiday falls on a Sunday, traditionally a day of rest for the hunting community.

Restrictions designed to slow the spread of the virus in Scotland and Wales have forced many packs to cancel public gatherings connected to their meets. Meanwhile, critics are demanding the prohibition on public land of a sport they believe is often merely a front for illegal foxhunting.”

Hmm! And why do huntsmen need a “day of rest”? Is it such hard work riding round huntin’ ‘n’ shootin’ ? 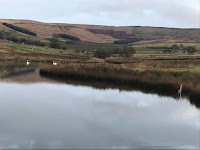 It was a good morning for spotting wildlife around our way though. At the millpond the heron was busy watching out for fish and the swans were back, swanning around gracefully as usual.

I almost fell out with my Spanish sister yesterday. I had meant to call her on Christmas Day but the day got too busy and so my call was put off until Boxing Day. We swapped family news, tales of what our smallest grandsons (almost two and just past two years old) and, of course, the Covid situation. Her son, soon to be thirty years old I think, is an ardent anti-vaxxer. My sister has had her two doses but expressed a reluctance to have a booster. Not even real reluctance, just a sort of lackadaisical “what’s the point?”. She says she thinks Covid is probably not as bad as flu or maybe not much worse. I don’t think she’s been vaccinated against flu either, despite having been so ill with it in her twenties that she had to be nursed by her Spanish fiancé’s mother. Eventually our mother flew out and brought her home to England. My mother may not have been the most intrepid traveller but she was a fiercely protective mother!

And now my sister seems to be turning into a vaccination sceptic, even maybe a Covid sceptic, believing it’s not as bad as the governments are making it out to be. We argued back and forth about the need for vaccination, the need for the whole world to have access to vaccination if we are to succeed in making Covid something we can live with … rather like flu in fact. We didn’t fall out in the end; my sister and I agreed to differ. She experienced a much harsher lockdown than we did and is now faced with the possible reintroduction of mask wearing in the streets of Spain. I still think she should get her booster though.

Reports here tell us that the vast majority of those in hospital with Covid and still dying with Covid are the unvaccinated. I think that tells us something. We’ll probably get news later today about further governmental thoughts about it all. Over in the USA some states are thinking of delaying opening schools in the new year as the numbers of Covid 19 cases rise, especially amongst children.

“The risks of Covid-19 for children are real,” said acting state health commissioner Dr Mary Bassett. “We are alerting New Yorkers to this recent striking increase in pediatric Covid-19 admissions so that pediatricians, parents and guardians can take urgent action to protect our youngest New Yorkers.”

The health department advised parents to protect “children who are five years and older by getting them fully vaccinated and protect children under five by making sure all of those around them have protection through vaccination, boosters, mask-wearing, avoiding crowds and testing”.

“Why? Omicron is so contagious that it finds unvaccinated/non-immune people who are most vulnerable for hospitalisations and deaths”.”