The television news yesterday evening said that we had got off lightly in the NW of England. Storm Barra hit Ireland badly. The Isle of Man got a bit battered, as did the Welsh coast. The rest of us hardly really noticed it. Well, that’s not strictly true but it was nowhere near as bad as Arwen. Sometime in the night, though, it seemed to come back and I woke to pelting rain and howling wind this morning. It’s playing havoc with my exercise routine.

Maybe I should investigate the opening hours for the local swimming baths and get back into swimming. If I’m going to get wet exercising, I might as well do it properly.

Now, according to this article, the latest thing to do is to learn to swim in a mermaid tail. I suppose it might be useful if you fell in someone’s pool while dressed as a mermaid for a fancy dress party. And you could impress your Little Mermaid obsessed granddaughters. Otherwise, I don’t really see the point. 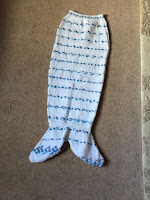 I have knitted mermaid tails for granddaughters before now.

A woolly mermaid tail is an ideal thing for curling up on the sofa to watch tv on a cold evening.

But swimming in one is a different kettle of fish altogether!!

Oops! Perhaps not the best expression! 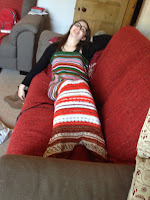 I have never quite understood grownups’ obsession with films intended for children. While I have no objection to watching children’s films with children - usually grandchildren - I wouldn’t go out of my way to watch them, even though the best of them usually have something entertaining for the parents - and grandparents!

I also have ambivalent feelings about remakes of old films. If something has worked in the past, and been well done, why do you need to redo it. However, I DO fancy the idea of seeing Spielberg’s remake of West Side Story. Interviews with the director suggest that it will be worth seeing.

And finally, something else being remade: in Charlottesville, Virginia, USA, in July they removed a statue of Robert E. Lee which had been the centre of controversy for quite a while, like so many statues relating to things past. Now they have decided to melt it down and create a new piece of art work celebrating black history. I have mixed feelings also about all this removing of reminders of our often mistaken past. Some of those statues need keeping, with explanations, so that future generations know what all the fuss was about.