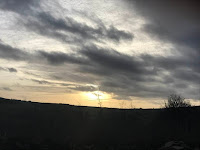 After a very inauspicious start yesterday (i got thoroughly soaked in the early morning drizzle) the day improved considerably. We walked up the hill to Dobcross to catch some vitamin D. My pictures of the winter sky look quite threatening but that’s because I took the pictures into the sun. 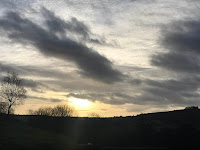 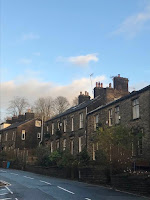 By the time we got home there was blue sky over our street.

Overnight it rained gallons and gallons!

The river was positively bouncing along this morning.

But the sky was blue over King Street in the village centre as I returned from  my run. 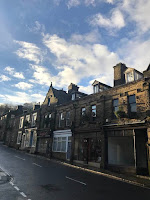 Incidentally, here is an old photo of that same King Street, culled from a Friends of Delph site.

It’s quite likely, however, that today will be a reverse of yesterday weatherwise. The forecast is gloomy for later today and indeed for the next week to ten days. Grey times ahead!

Still it could be worse.

Think of Ghislaine Maxwell, probably spending the rest of her life in prison … unless her no doubt well-paid lawyers find a way to weasel her out of that guilty verdict. Which could still happen!

As I listened to news reports last night, I found myself reflecting that the young women trafficked by Maxwell and co were in some ways more fortunate than similar women trafficked by less socially prominent individuals. The women who testified seem to have been able to remake their lives. Yes, the trauma is undoubtedly real but they have managed to go beyond it. Many women, girls at the time, were trafficked into a life of continued prostitution almost certainly with violence and drugs involved. Everything is relative!

In a social media group called Campaign to rejoin the EU Infound a couple of interesting posts:

“We put some toy cars up on EBay, total value came to £70. So we went to the post office, asked what we needed to do to send the package to Germany (the buyer lived in Germany) and we paid our money and sent the package. It was returned a few days later as it was not accepted in Germany. If the post office doesn’t know what was required, how else do we find the information out. Before Brexit this would have been as easy as posting to the next village or town, now it’s a game of trial and error. Even our government doesn’t understand the rules, how on eartH are the post masters and mistresses supposed to know. I would hate to now be in business sending packages and goods to Europe, I genuinely feel for them, it has to be soul destroying!!!!”

“A friend of mine, every year, goes to Bournemouth football club in jan, and buys a few calendars in the sale to send to his wifes family in ireland. every year he goes to the post office, pays his fiver and off they go. last year, he went to the post office, was given an army of forms to fill out, then he got a bill for just under £27!!! he isn't bothering any more!

god knows how firms are supposed to deal with all this BS!!”

Ah! The benefits of Brexit.

When I first saw last night that France is not allowing Britons without French residency to drive through their country to reach their homes in other EU countries I thought it was yet another Brexit benefit. On reading further this morning, I think it’s more of a Covid-controlling measure. They are quite terrified by increase in cases of Omicron. But will stopping the British driving through France make any difference? We shall see.

Meanwhile, I have replenished our supply of Covid home-testing kits, just to be on the safe side as they are apparently in short supply in many parts of the country. It’s not that we are planning to go very far in the immediate future but should the need arise I want us to be able to test. Such is the new normal!