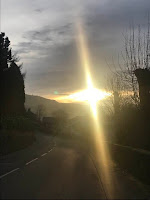 We’ve passed the shortest day. A number of my friends surprisingly posted photos of themselves celebrating the solstice. I never knew I was acquainted with so many druids and pagans! 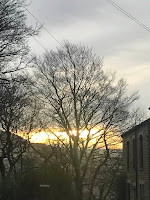 I walked out early this morning. The plan was to walk to the market rather than cycle there so that I could then continue to Tesco, pick up the remaining few things I need, thus avoiding the need to do major shopping before the weekend, and then catch a bus home. At that time it looked as though the sun might be trying to rise but I think the clouds beat it into submission and pretty soon everything was dull and grey again. 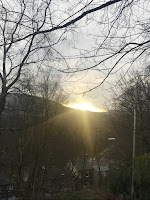 As it turned out, my daughter phoned me while I was still in Uppermill. She had left her small girl playing Minecraft while Daddy worked from home. She had taken the small boy to nursery as he demands too much attention to be left at home while Daddy works from home. Her plan then was to go and have a catch-up chat with an old friend but the old friend was still in bed. So she checked what I was up to, treated me to a coffee in Uppermill and then we went off to Tesco together. So, of course, I bought rather more stuff than I might have done had I had to carry it all home on the bus. So it goes.

We have been assured that Christmas will go ahead as planned in England. Here’s Michael Rosen’s take on how that decision was reached:

“Carrie, what shall we do? Lockdown or not lockdown? The decision is yours. Your prescience, your perceptive acuity, your flashes of insight have aided me just as Venus aided Homer. This was proven by you choosing me. Send memo via the nanny.

Scotland and Wales are shutting down rather more than we are. We’ll see what happens after Boxing Day and find out whether or not schools will open on time.

In our house we’re more or less organised for Christmas. The presents are mostly wrapped. The Christmas cards have been despatched, apart from those to be pushed through neighbours’ doors. We’ve reassured our anxious oldest granddaughter that a way will be found to get her and her dog to our house on Christmas Day. So far her mother has refused to have the dog in her still relatively new car. All that remains is to prepare a feast and eat it.