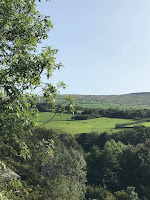 e Diggle Chippy Hike”. For some time now my brother-in-law has joined us in an occasional stomp from our house over the hill to Diggle, with a stop off at Diggle Chippy, and back home along canal towpaths and eventually the Delph Donkey line. As our granddaughter has a week off work I suggested she should join us. Could her housemate come along too? she wanted to know. Why not? After all, we were still within the rule of six! A chippy hike was just what the two young women fancied and so the name was born and I suspect that is what it will be from now on, no matter who is participating. 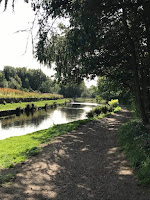 Diggle Chippy is effectively a wooden hut, about the size of a garage, at the side of the main road in Diggle. In fact the main road IS Diggle. It’s one of those ribbon developments that has only had extra bits, housing estates and so on, added on to either side of the road in fairly recent times. And I suspect that if anyone were to ask for planning permission to convert a wooden hut into a fish and chip shop now that permission would probably not be granted but as far as I know the place has been operating in that way for donkeys’ years.

It’s a very good chippy, one of the best in the area, although our opinion may be influenced by the fact that we always go and eat our fish and chips in a nearby park within minutes of purchasing them. Fish and chips al fresco are always the best! At the moment customers queue, socially distanced, at the front door, place their order and pay, give their name, and then go and wait, socially distanced again, at the back door just around the corner for their order to be delivered to them. It works well. It is rather a pity not to be able to go inside the chippy, however, as it is decorated inside with masses of photos of local places and events, Whit Walks and school photos and local sporting events, dating back probably to the 1950s and earlier. It’s like a mini-museum to the area. Sometime in the future we might get inside safely again!

As we waited for our lunch order to be delivered to us, our granddaughter asked, “Isn’t this close to Grandpa Greene’s place?” Indeed it was, just a bit further up the lane where we were waiting. “Grandpa Greene’s”, so the website tells us, “is proud to manufacture ice cream in Greater Manchester, our luxury ice cream is supplied to premium wholesale outlets across the North West of England and Yorkshire including Hotels, Restaurants, Farm Shops, Ice Cream Parlours, Theatres and Cafés.”

It goes on to explain:

“Back in the 1920s Grandpa Greene made his own ice cream, using a churn in the back yard of his corner shop in Salford. Today at Grandpa Greene's we have taken his basic recipe and developed it into a luxury ice cream, handmade the old fashioned way.” 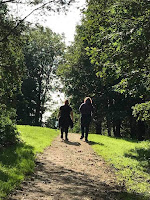 This rather fine ice-cream is sold in a farm cafe not far from our house, possibly also in a cafe in Uppermill, and certainly in a very busy canal-side cafe up the lane from Diggle Chippy.

So once we had eaten our fish and chips we decided an ice-cream was in order for dessert and followed a new-to-us path round to Grandpa Green’s, where we once again queued in a socially distanced manner. 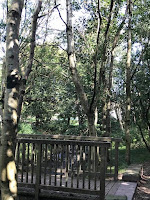 And then off we went, eating our ice-creams along the canal towpath, admiring the remnants of railway and canal industry from time gone by. 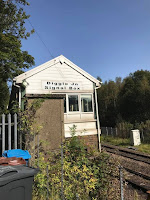 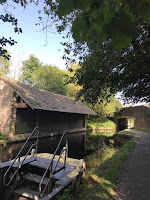 e ingenious one-way systems and screened places to order and serve food and drink. Good luck to them!

These are difficult times. There are rumblings of a proposed two-week national lockdown, intended to create a kind of “fire break” - have two weeks with contact restricted to a minimum, hoping to put the brakes on the once-more spreading virus. This is supposedly planned to coincide more or less with schools’ half term holiday at the end of October to limit impact on education. We shall see.

I hear that all the pupils and staff at Eton have been tested for Coronavirus. How very reassuring! Did they put the fees up to pay for the tests to be done privately? It’s funny that state school have been issued with just a small number of testing kits. Maybe nobody expects the pupils there to be future prime ministers!

In other matters concerning the modern world the Brexit nonsense continues. Will we or won’t we break international laws? I have taken to buying extra stocks of certain goods in case of shortages but my stockpiling is not very efficient. And then there is the global warming problem. Scientists have said that satellite images show that smoke from the USA fires has travelled 5,000 miles to reach the UK. And there are fires in Siberia, where the permafrost is melting! These are not problems affecting just the immediate place where they occur. They are global matters. It’s time for a global solution.