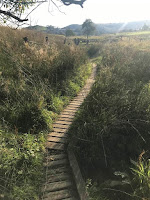 The word duckboard was created during the early 20th century to describe the boards or slats of wood laid down to provide safe footing for the soldiers of World War I across wet or muddy ground in trenches or camps. The original duckboards didn't always work as intended though. According to one soldier, duckboards came by their name because someone walking on wet duckboards was liable to slide off them much like water slides off a duck's back. Today's duckboards appear in all kinds of places - from marshes to the floors of saunas. The word duck itself has been part of the English language since the days of Old English, when it had the form "dŪce."”

From Wikipedia it sounds as though boardwalks are more or less the same as duckboards.

I got onto this topic because on Monday we spent some time walking along duckboards. The fine weather from the weekend continued into  Monday. The washing was drying nicely on the garden and Phil and I decided to go for a walk. We followed a frequent route of ours, up the road past the cricket club, turning left onto Sandbed Lane and then onto Hull Mill Lane (old names for roads are very pleasing!) as far as what has been known for donkeys’ years in our family as “The Pooh Sticks Bridge”. Ever since we first read Winnie the Pooh many, many years ago with the children, we had occasionally stood on this little bridge, dropped sticks off one side and waited to see whose stick would win the race - just like Christopher Robin and friends!

At that point we usually turn left and go past Eagle Mill pond, back through the village and home. On Monday we turned right and followed a path which might eventually have led us to Castleshaw and the just about traceable remains of a Roman fort. There were huge qu

antities of Canada geese on Hull Mill pond, making a trem
endous racket with their honking.

And not far beyond the mill pond the duckboards began, making huge sections of the path more passable in rainy weather. Not that we needed such assistance on Monday, after several days of fine and sunny weather.

We did not continue to Castleshaw but took a left turn up a steep lane, head 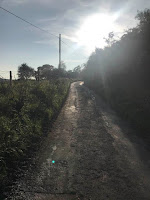 ing in the general direction of Heights Church, although that was not our intended final destination. We went past quaint old stone houses, some of them old farm houses, others clearly weavers’ cottages, judging by the style of the windows. One was mysteriously named The Monastery. If it ever was a monastery it was a very small one. Another was called Paradise. 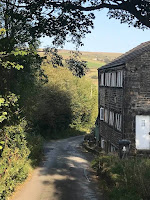 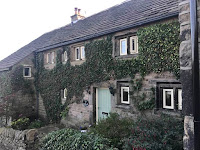 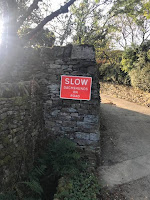 And by one gateway was a sign which read “SLOW! Daschunds in the road”. In the next driveway, obviously to prove them right was a small daschund barking away at the top of his small lungs. 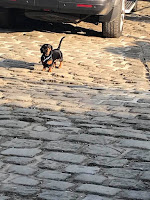 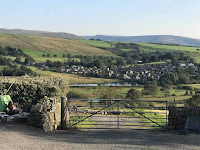 ly we reached our highest point - not Heights Church but pretty high, with fine views of Delph village.

There we followed a steep and rugged path down the hill. 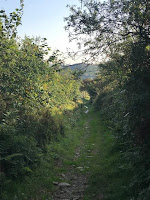 At one point it was covered with slabs of stone, a drainage system of sorts. Many years ago, following the same 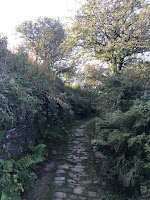 path on a rather wetter day, my feet slipped on a wet stone and I ended up sitting in the mud. The long off-white jumper I wore was even more off-white in the backside area after that and try as I might it was never quite restored to its former glory. A lesson learned - when walking in muddy places, wear mud-coloured clothes!

We had no such problems on Monday though. 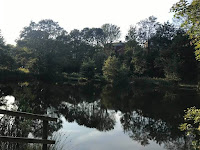 Having navigated the stony path we reached the continuation of Hull Mill Lane and made our way back to The Pooh Sticks Bridge, the  past Eagle Mill pond, through the village and returned home. Another fine adventure.

Yesterday began equally fine and sunny. I cycled over to see our anxious granddaughter and cheer her up by forcing her out for a walk after she finished her session of working from home. After the latest government announcements I think she will be working from home for a good while longer. We wait to see what the next few weeks will bring.

By the time I decided to cycle home again the sun had disappeared and the clouds had moved in. However, I managed to make it home without any rain showers. How many more good days will this autumn give us? I wonder.