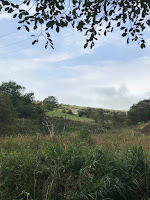 e end of the afternoon yesterday my daughter went to collect her eldest daughter and they drove round to my house with the small people so that we could go on a mini family adventure - down to the duckpond, formerly a millpond when there used to be a textile mill there, along the less-muddy-than-it-used-to-be path and eventually to the park on the edge of the village. There I had to help the four year old work the toy mechanical diggers in the sandpit. The weather was breezy but reasonably fine. And the eldest granddaughter adopted a snail to add to her menagerie (small tortoise, bearded dragon, fancy rats, land crabs, cat, snake!). It was quite a pretty snail as snails go but even so .... 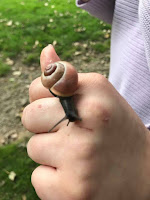 I read some stuff about the startling number of young Americans who have never heard of the holocaust, some who have heard of it but believe it is a myth, and even some who think it was caused by the Jews. My first reaction was sheer amazement and I wondered what their education system was doing. But then I also read about their president explaining that the virus will go away on its own because of the “herd mentality” and I realised they have no role models to follow.

“It would go away without the vaccine, George,” POTUS told journalist George Stephanopoulos. “With time it goes away and you’ll develop like a herd mentality. It’s gonna be herd developed, that’s gonna happen.”

Apparently he also blamed joe Biden for not instituting a national mask mandate during the pandemic. Joe Biden’s response to that: “To be clear: I am not currently president. But if you chip in now, we can change that in November.”

The mind boggles. You simply could not make such stuff up!

But then, over here, it seems that one of our senior police officers has got a bit cross about Extinction  Rebellion protesters because they go “all floppy” when arrested. They really should just accept the fait accompli and help the police by going quietly and smartly to the police van! Sir Stephen House, the deputy commissioner of the Metropolitan police, said the tactic of going limp was a “flipping nuisance” as it required extra officers to drag protesters away.

House told a London assembly police and crime committee hearing: “We have asked them to stop being floppy. And that might seem like a silly thing to say, but when we arrest them and pick them up, they go all floppy, which is why you see four or five officers carrying them away. It’s a complete waste of officers’ time, and a complete pain in the neck.”

That’s odd! You would have thought the police would know about non violent direct action tactics!

Fires! The First People of America have been advocating “cultural burns” as a way of preventing, or at least reducing, the horrific forest fires in the USA. Bill Tripp is the director of natural resources and environmental policy for the Karuk Tribe Department of Natural Resources. This is what he has to say about it:

“Prescribed fire and cultural burns are fires that are intentionally set during favorable conditions, sometimes at regular intervals to achieve a variety of socio-ecological benefits. They reduce the density of small trees, brush, grass and leaves that otherwise fuel severe wildfires. Clearing undergrowth allows for a greater variety of trees and a healthier forest that is more fire resistant, and it provides more room for wildlife to roam with beneficial effects such as enhancing the success of our hunting. Fire suppression, meanwhile, involves extinguishing fires using teams of people, bulldozers, fire engines, helicopters and airplanes by land management agencies assigned that duty by federal, state and local governments.”

His explanations have a mix of science and what some might call mumbo jumbo about sacred places:

“The Red Salmon Complex fire is currently burning on an area sacred to the Karuk people. Our sacred values are negatively impacted when state and federal land agencies dig fire lines with bulldozers and send hundreds of people into places where only a few at a time should go. Rare endemic plants get trampled, archaeological evidence gets rearranged and chemicals get dumped into the watersheds we drink from and salmon inhabit. Indigenous peoples have to respond to protect these things.”

But maybe he is right and the indigenous people understand things about how the land works.