There was frost on some, but not all, plants on the patch of land just before the 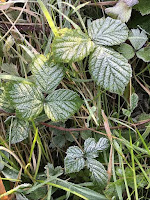 Donkey Line bridle path when I went out for a run this morning. That seems a little early to me. We had what felt like summer in April and May. A rather soggy sort of autumnal period set in through the middle of August and into early September. And now, late September, frost! Is this a weird aspect of climate change? Have the seasons taken a sort of time shift? Goodness knows. It’s certainly colder than yesterday. And we can do precious little about it ... apart from fighting climate change, of course. I would suggest turning on, or up, the central heating but that rather goes against helping the ecology!

Yesterday we did not walk up Lark Hill as we had sort of planned. Our daughter contacted us and proposed a windy walk around the village after she had picked up her mid 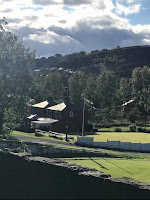 dle child from high school. In the event, he proved antisocial and stayed at home but she came round with the two small people.

We followed our usual route, up the road past the cricket club, checking on the pigs who live across the road. 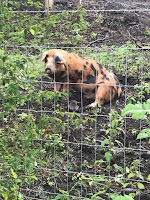 Close to The Pooh Sticks Bridge the four year old, who had worn her wellies on purpose, paddled in the ford and then we took her on an adventure up the hill path instead of following the lower path by the millpond. We caught up with her mother, who could not take the hill path as the buggy wouldn’t fit in the path, at the point where the two paths meet. Shortly after that Phil abandoned us to head for home while the rest of us went to the park so the small people could play on the swings.

After that we deviated from our normal route to walk through a bit of woodland and admire a bit of a waterfall. 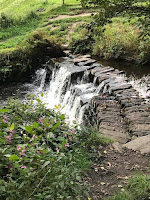 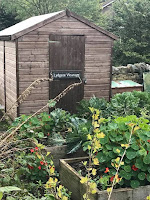 This brought us out a little further up the valley, after which we took the path back towards the village, skirting the allotments, where a shed seemed to have delusions of grandeur, calling itself Lydgate Vicarage!

And finally we were back in the village and almost home. A mini-adventure. 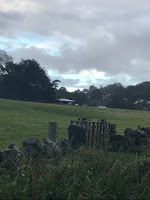 Our eldest granddaughter is feeling a little bereft today. Her housemate has returned to university and now she is rattling around the house on her own - apart from her menagerie, that is! The housemate has gone somewhat reluctantly, rather afraid of finding herself trapped in her hall of residence if/when the virus strikes. At least one of the Manchester universities is already having problems but they fade into insignificance compared with Scotland, where students went back a little sooner. There is talk there of students possible not being able to return home for Christmas. I rather get a feeling of things spiralling out of control.

And then there is Brexit, with talks of a border in the Irish sea, a border around Kent and a border between England and Scotland. Brexit definitely helped us all take back control!!

It all seems rather chaotic!