“Presidential” debating! Going to the market. How to dress warmly.

Yesterday afternoon on Radio 4’s Today programme Evan Davis suggested that insomniacs might like to sit up into the wee small hours to listen to the American presidential candidates’ debate. I didn’t stay up for it. I’ve watched The West Wing and seen the dramatised version of the preparation for debate and the debates themselves. That ‘s enough for me. Besides I truly cannot stand to watch or listen to Donald Trump speaking. His mannerisms, physical and verbal, make me cringe. Mind you, I feel the same about Boris Johnson.  Besides, I usually have little difficulty sleeping.

Reading reports this morning, I feel that I had a lucky escape. That or I made the right decision. It sounds to have been more of a small section of chaos than a debate, with Trump talking over Biden and Wallace, the moderator who was unable to control the debate at all, by all accounts.

From the Guardian online I culled this:-

“Here are some of the key takeaways from the night:

And then there is this:-

“Kathleen Hunter at Bloomberg has this morning described last night as a “mud-wrestling match”. She writes:

Refusing to give any ground, the president at times flustered Biden – whom he has for months sought to paint as senile — with unrelenting attacks on his family and policies. Trump, 74, made assertions — on election integrity, his income taxes, a potential coronavirus vaccine and other topics — that don’t stand up to fact-checking.

For her, she thought “The biggest takeaway from the unedifying spectacle might be Trump’s refusal again to commit to a peaceful transition.”

And she had this to say about the prospect of the remaining two debates:

The question now is whether the exchange will be more civil when the candidates meet on 15 October for their second debate and whether – with large portions of the electorate already having either decided on their pick or cast their ballot — the sessions even matter much.”

And if you want any more, here’s a link to a summary of sorts of what went on:-

That’s enough of that.

Today being Wednesday, and the forecast being for rain, rain and more rain, I donned my waterproof and got on my bike to cycle to the market in Uppermill. Amazingly, I did not get rained on. Rain has fallen since then but once more I had an uneventful ride without getting soaked. It has to be said though that the ride home with panniers full of fruit and bread and fish is rather harder than the outgoing ride. My Fitbit is still confused by the whole business and tells me I have done 2,500 steps whereas if I walk there and back it clocks up at least 12,000. And how does it know I am on a bike? Witchcraft, I reckon! 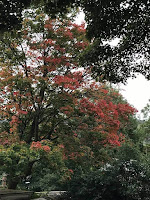 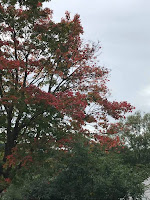 As we progress into autumn and the weather turns colder, the fashion pages on the newspapers turn to what to wear to keep warm. Not denim, is one answer. One such article included this gem today:-

“Do you need to rethink your hat?

Not really. While it’s not entirely true that we lose most of our heat from our heads, all our experts agree that hat-wearing is a good idea, and they are especially enthusiastic about cosy ones. Jones and Brunton mention the importance of covering your ears – Brunton prefers a deerstalker type – but knitting could become a new valued skill, with the woolly beanie name-checked as an essential accessory. “I’m all for a woolly hat in winter,” says Hadler. “My mum knits me lots, and I have every colour.” They can be worn everywhere, too. Felicity Moir, an acupuncturist who swims every day at the Hampstead ponds in north London, says: “A lot of people swim with a woolly hat on. It’s a very funny sight.”

And now I am stuck with a picture of swimmers in bobble hats!