Opinions of adventuring. Statistics about education. Playing with the truth. Diets. Film festivals and eating in cinemas.

The fine and sunny weather continues today. If it weren’t for the quagmires still hanging around in places the sun does not really reach, you could almost forget that we have had so much rain. So the weathermen who predicted a really cold Bank Holiday Monday were not quite right. 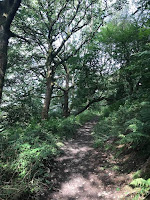 We planned yesterday to walk our “forest path”, the track through a bit of woodland behind Dobcross village, to see how the rainy weather has treated it and to check on regrowth of all the nettles and brambles that Phil removed on our last foray down there. Muddy in places and some regrowth but not overwhelming was the answer to our question. That had been all our plan but not long before we set off our daughter suggested we meet in Dobcross and do a bit of a walk from there.

And so we met in the garden centre carpark, admiring and trying to identify certain mysterious trees while we waited. 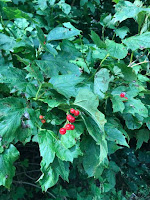 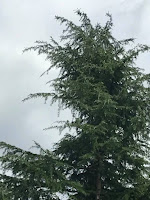 Then we walked up, the hill, down to the canal towpath, back along the lane behind Uppermill and back onto the Donkey Lone bridle path. There we split into two groups and went our separate ways. 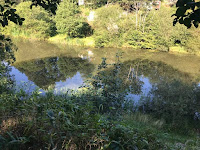 This was a longer walk than expected and so when I proposed a ramble today past the millpond and on towards Castleshaw, where there are the remains of a Roman fort, Phil demurred, saying two days of long walks were quite enough.

But it is a very nice day! So it goes. A stroll round the village will have to suffice.

Out in the wider world, where schools will be reopening this week, some of them indeed today, I read that the “gap between rich and poor pupils in England 'grows by 46% in a year'”. A study by the National Foundation for Educational Research, based on interviews with more than 3,000 teachers and heads at more than 2,000 schools, apparently shows that disadvantaged and black and minority ethnic children had gone backwards compared with their better-off peers since March. Undoubtedly true, but where does the figure 46% come from? Estimates by teachers it seems. But estimates are not really very scientific and sometimes appear to be pulled out of the air. Certainly one gets the impression that politicians make them up to suit their purposes almost all the time.

Talking of politicians, how about Mr Trump declaring in his speeches that Mr Biden will defund the police and lead the country into total mayhem and lawlessness. If you repeat a lie often enough lots of people will believe it. Mr Biden needs to shout a bit louder that he has no intention of doing any such thing!

Here’s an article about the latest plan to reduce the number of diabetics by putting many of them on a diet of low calorie soups and shakes. “The year-long plans will see those who could benefit provided with “total diet replacement products” such as specially formulated low-calorie shakes and soups for three months, alongside support to increase their exercise levels.”

All very laudable but surely there must be a better way than a diet of “shakes”. I have known people to lose weight on such liquid diets, only to put it back on once they resume normal eating.

The cynic in me wonders which of the friend of the cabinet members has a diet-shake company or maybe has received a contract to produce the same without any experience of doing so before!

It’s already September and we are getting round to film festival time. Venice is gearing up to a Covid-free festival this year. I did wonder if enough new films would have been made to merit a festival but then I suppose most were made before the Cornavirus crisis. Will there be enough for next year though? That’s another question for another day!

This year, “ahead of the event guests have been sent a list of Covid-19 guidelines, including information on passing through thermo-scanners as they enter the festival and anyone found to have a body temperature of 37.5°C or higher will be denied access.

The guidance also states that face coverings must be worn at all times, including in outdoor areas. It is not clear how that rule will be enforced, or whether attendees will be allowed to eat or drink while in screenings.”

It’s the last point that intrigues and mildly annoys me, as it always does when films and cinema are discussed. Why do people need to eat and drink while watching films? Beforehand, in the interval and afterwards, I can just about understand but why can people not watch a film without stuffing their faces? New modern cinemas cater for this by having drinks holders next to the seats. Crazy! Will diabetics on the new diet be able to take their low-calorie shakes in with them?

And I run the risk of turning into a grumpy old puritan!

Life goes on. Stay safe and well, everyone!
Posted by Anthea at 06:21