Getting up in the morning. Restrictions fatigue. Too much testing of children? Wedding industry!

It gets harder to motivate yourself to get out of bed now that the mornings are growing colder. I wonder how many of the people working from home have set up their computers next to their beds so that they can simply stay in bed to work. Then there are those you hear if who retire to bed at nine at night to watch TV. This is not a healthy way of life, surely!

But colder the mornings definitely are. Today is not so bright cold as yesterday. There is more cloud but it does not seem to be doing much to warm things up, if cloud ever does that. 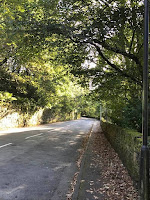 day we took advantage of the sunshine to walk up the hill to Dobcross, down the hill on the other side of Dobcross village and back home along the Donkey Line. Not a bad walk at all. 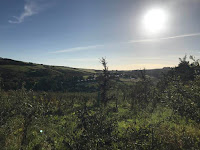 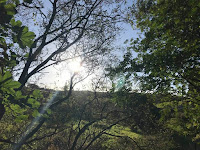 Throughout the more serious part of lockdown much was made of the development of community spirit, people pulling together and helping each other out. I’m pretty sure that is still the case for many places but I read that in some a sort of fatigue has set in and people are complaining about each other. Demarcation lines are being established. Disputes over who is responsible for trimming the hedge are cropping up. Downstairs neighbours are moaning about their upstairs neighbours following Joe Wicks’ workout programmes.

And the inevitable helplines have popped up: Calm Mediation in London and Scottish Mediation,  north of the border. Scottish Mediation apparently launched a coronavirus hotline in May and saw a 50% increase in calls on normal times, including one person exasperated by music lessons upstairs. “People were more or less happy to go along with it during the first lockdown,” said a spokesperson. “But now there’s been a little taste of freedom, going back into it … people’s patience is at a limit.”

There you go - the spirit of sacrifice when we were initially “all in this together” has worn a little thin. People have been reminded that another reality exists. One chap is supposed to have said he had been laughed at for wearing a mask earlier in the crisis and remained angry at neighbours who failed to follow the rules. “You can be in one household doing the right things and see your actions negated by someone else,” he said. “I don’t think I would ever dob a neighbour in, and anyway, if you do say anything, you just get a mouthful of abuse.”

Which brings me to a linguistic point: where did that expression “to dob in” come from? Until Priti Patel said it a few weeks ago I had never heard the expression and now it keeps popping up all over the place. Strange!

And it’s not just in this country that restriction fatigue exists. Madrid’s regional government is in conflict with the Spanish national government over restrictions. The conservative People’s Party’s Isabel Dîaz Ayuso, who leads the regional government, is refusing to implement the recommended lockdown, despite high numbers of cases. She doesn’t think It’s necessary. She has form for this. Back in May she questioned the need to extend the national lockdown, declaring: “People get run over every day but that doesn’t mean we ban cars.”

Hmmm! That may well be so but we do introduce traffic calming measures to limit the numbers of people run over by cars every day!

Meanwhile, here in the UK,  a certain Prof Russell Viner of UCL and Great Ormond Street children’s hospital has suggested that we are testing too many children. We need to keep schools fully open, he said. “I think we have a coherent policy about testing in schools, but we are probably being overcautious and testing too many children. It was the right thing to start with, but it has had some unintended consequences.”

He is undoubtedly correct in his statements about children always catching colds at this time of year. It has always been the case when schools open up again after the summer break.

“There is clearly limited capacity in testing at the moment,” he said. “We need to be thinking: ‘Are we testing too many children?’ because of our understandable but probably unscientific and misplaced concerns about children being infected in schools.”

He needs to put himself in the place of concerned parents though. If your child catches a cold at the moment you are immediately faced with that big question: is it the virus?

One of the victims of the virus crisis is the wedding industry. Much has been made of the emotional turmoil of having to cancel, or at any rate postpone, your big day but behind all that is a whole industry, which I swear did not exist fifty years ago. Or at least it did not exist to the same extent. Now I read that 400,000 people work in the wedding industry, which contributes £14.7billion to the economy. Wow!

I blame those televised royal weddings all those years ago: Princess Anne, Charles and Diana, Andrew and Fergie! Suddenly everyone wanted their own royal wedding, with a huge crowd of bridesmaids and half the country invited to join in the celebration.

Whatever the cause, all the cancelled and postponed weddings are causing wedding planners, dressmakers, florists, caterers, and even producers of “favours” to go under. No matter that I think weddings have got a little out of hand in recent decades, it remains true that all these people are unexpected victims of the virus.