Being organised. Doom and gloom. Jumping on band wagons.

Yesterday  I discovered that Saturday’s post somehow remained in draft. Strange! I have no idea how I did that. So the post I planned for yesterday is  now going to be Tuesday’s post, slightly adapted. 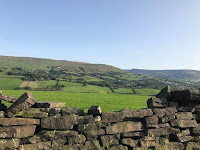 On Sunday we were better organised about going out for a walk than on the previous day. We hung around to see if there were any family “adventures” in the offing but eventually just took ourselves off up Lark Hill, a good uphill stomp and then back down through Dobcross village. It was a fine day so we got some good views from up at the top. 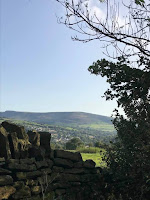 Later I phoned our son. He’s very pessimistic about the whole situation at the moment and is pretty much convinced that Christmas will be effectively cancelled. I don’t think we have ever gone quite so long without visits between the northern and southern bits of the family. The Chief Scientific Adviser and the Chief Medical Officer are suggesting that we should expect a further six months of restrictions all over the place. Our son in the meantime expects that we’ll see a further national lockdown. Such a lot of doom and gloom!

By the end of yesterday (Monday) the news was out that from Thursday pubs and restaurants must close at 10pm. The doomsters are already saying that this will encourage people to go on to illegal house-parties, using the pub for “pre-drinking”. I can see pubs doing what used to be called “lock-ins” with selected customers just staying on after closing time with the lights down and the doors locked. But most of us will just accept it and get on with life.

This morning I saw community police officers remind a young woman to  put on her mask before getting on the bus. She stared at them and got on the bus, mask-less. They followed her onto the bus, gave her a bit of a talking to, checked if any other passengers were wearing masks and finally let the bus get on the way. Be vigilant! They are watching us!

We don’t seem to be going anywhere very far afield but rumour has it that Boris Johnson has been on a secret trip to Perugia in Italy. Downing Street has denied this. Did he take his family on a secret holiday? (Is this why he says he can’t afford a nanny?) Did he go to swop Covid experience notes with Berlusconi? Did he go at all or did someone just see a Boris Johnson look-alike in the airport and on a plane? And in the end, are we really interested?

Hanging washing out this morning, I chatted to a neighbour - is this mingling? - who was busy filling her compostable green bin with stuff from her freezer. She had been having a sort out and discovered stuff at the bottom of her chest freezer that had gone out of date in 2017, some of it still in the carrier bags in which she had transported the stuff from Iceland. This going beyond the use-by date is something we all do. Part of her problem is that since her husband died a few years ago she is no longer cooking the same amount of food. So her green bin is now half full of frozen stuff and she is busily mowing the lawn so that she grass cuttings to put on top of it all, as if the dustbin-men are going to notice what is in her bin.

We finally had new bins delivered at the end of last week. Since the green bins are only emptied once every three weeks now, rather than weekly as it used to be, my small compostable bin the kitchen has proved inadequate. This is what happens when you cook using fresh ingredients, you end up with a lot of vegetable peelings! So now we have a bigger green bin and an ENORMOUS blue bin for paper and cardboard. Now might be the time to start shredding old documents we no longer really need to keep.

I am a great believer in recycling and in protecting the environment. So is Prince Charles. I read that he said "swift and immediate action" would be needed to curb the impact of the climate crisis, adding that the coronavirus pandemic is a "window of opportunity" to reset the economy for a more "sustainable and inclusive" future.

"Without swift and immediate action, at an unprecedented pace and scale, we will miss the window of opportunity to 'reset' for... a more sustainable and inclusive future," is his message.

"In other words, the global pandemic is a wake-up call we cannot ignore...

"...[the environmental] crisis has been with us for far too many years - decried, denigrated and denied.”

"It is now rapidly becoming a comprehensive catastrophe that will dwarf the impact of the coronavirus pandemic."

There you go. The heir to the throne has spoken again. Is he jumping on a bandwagon?

And is Joan Bakewell jumping on a bandwagon when she talks about being sexually harassed early in her career by a junior government minister, as she apparently told a reporter for Times Radio? If she was, as she put it, the “victim of unwelcome attention” during the 1950s and 1960s, isn’t it a bit late now to start going on about it?

In the interview, the 87-year-old described how a junior minister, who has since died, had to be “fended off” after he made a grab for her.

“I was assaulted by a member of the government in a taxi when I went to fetch him from the House of Commons to come on the programme,” she said. “You know, this kind of thing happened, it happened all the time.”

When asked whether she reported the minister to police, she said there would have been no point. She explained: “They would’ve said, well, that’s just to do with your private life. You’re alright, he’s not done anything that breaks the law.” She said there was no point in discussing harassment with senior figures at the BBC “because they would be doing the same thing”.

Sometimes it seems as though everyone is looking back, reassessing their past life and deciding they were hard done by. Or am I just growing cynical?

Anyway, here we are at the start of another week. My Monday milk delivery was not stolen from my doorstep, as has happened at least twice in the last few weeks.  And the sun is shining again. So all is well with the world so far. We shall see how the rest of the week pans out.