To panic or not to panic? That is the question!

The panic began on Monday.

I received a message early in the morning from a friend from my Italian conversation class. He lives in Wrexham and heroically makes the journey ever Tuesday: bus from Wrexham to Chester, train from Chester to Manchester, brisk walk from Manchester Piccadilly to Ardwick, where the class takes place. He usually leaves the class early to ensure catching a train back to Chester in time for the bus back to Wrexham, thus avoiding a £25 taxi ride! Ouch! And I thought my journey was difficult!

Here in Saddleworth we had no more than a sprinkle of now around first thing Tuesday morning. Our daughter was, unusually as she is not contracted to work on Tuesday, going into school for a training session - some kind of fancy Maths teaching, I believe. And so the tiny person was having breakfast and a morning’s play chez Grandma. All went well. By lunchtime mother and child had been reunited and the plan was to drive me to the tram stop later so that I could go into Manchester.

Then the mobile phone business intervened. I recently had my ancient model iPhone replaced with a more up to date one, courtesy of our daughter. Yesterday it was Phil’s turn. Our oldest granddaughter had finally got around to wiping her data from the iPhone she was no longer using and was passing on to her grandfather. Our daughter set about assisting with the transfer of Phil’s data from his old sim to the new, smaller sim in the more up to date model.

And this took ages! Far longer than anticipated!

I almost went out to catch a bus.

I probably should have done so.

In the meantime, sleety snow had begun to fall, more wet and miserable than anything else but predicted to freeze later.

Eventually we set off. We made a brief stop en route to buy wellies for the small person and clever gloves that allow you to use your mobile while wearing them for the small person’s mother. By now time was ticking by, the roads were a slushy mess and the relatively few cars around were all slow-moving. We contacted the school the teenage grandchildren attend and asked for them to be released early so that we could pick them up en route for the tram stop, so that my daughter did not need to go back later for them.

All good, no problem, except that it took so long to get to the school (slow moving traffic) that it was already home-time when we reached the school. There were so many cars collecting teenagers that it took about 40 minutes to do what is normally a 5 minute drive from the school to the tram stop.

Further cause for panic. However, I made it to the Italian conversation class, where we had an amusing but almost scatalogical class, discussing different Italian terms for the toilet! I told the tale of my first ever visit to France, aged 17, with a school friend: two little maids from school let loose in Paris! We had been told by our French teacher that “la toilette” absolutely did not mean “loo” but all the business of washing your face, doing your hair and makeup, and generally making yourself, if not beautiful, at least presentable. So when we needed the loo (which incidentally is a corruption of “l’eau”, French for water) we were at a loss for what to ask for in a French cafe. After we had had tried a range of possible but clearly useless words, not to mention attempting some sign language, we were walking around with our legs crossed when light dawned and the waitress cried, “Oh! La toilette!” and indicated its whereabouts. Oh boy!

This morning my panicky friend from Wrexham messaged me to say he had arrived home without problem last night but that it was currently blizzarding in Wrexham and had been for a good half hour. I looked out of the window and saw an inch or so of snow on the pavements outside. No way was I running on such a slippery surface.

Unlike some people, I usually have a plan B. Today was no exception: cancel the run, dress warmly, don stout boots and walk to the market in Uppermill to see if the fish-man had made it through the weather. He had!

I had an excellent early morning walk. Here are some snowy pictures to show for it! 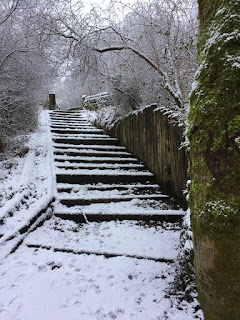 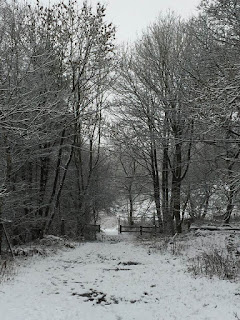 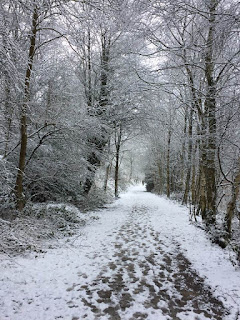 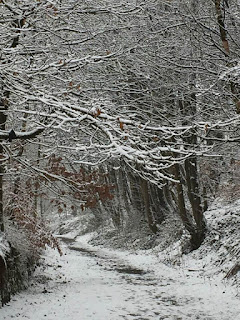 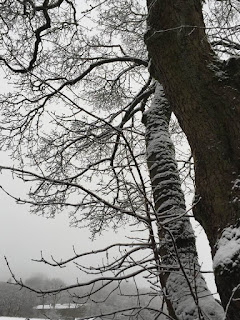 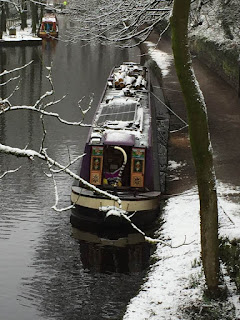 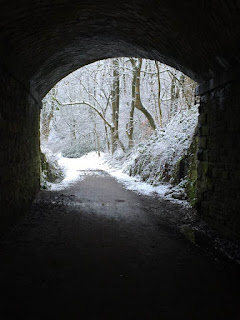 Various teacher friends on Facebook are not panicking but crowing because they have a “snow day”. In other words their place of work is closed because of the weather. Such fools! It always used to annoy me intensely when they closed my college because of snow. There was NEVER enough time to cover the material in the curriculum, without taking extra days off for a bit of snow. Does this happen in countries where they regularly have heavy snow? I doubt it! Otherwise, how does anyone there ever get an education?

Actually, the panic began in 2016 when 52% of those who voted in the referendum said they wanted to leave the EU. Since then we have been hearing that “the people have spoken” and a whole lot of time and money has been spent getting very little organised. Yesterday’s session in Parliament appears to have continued in the same vein: a lot of heated discussion but not a lot of progress towards a solution. “MPs have voted for a fantasy,” said Jonathan Freedland in today’s Guardian.

We await developments!
Posted by Anthea at 05:50