Finishing off the Christmas season!

Well, so far 2019 has managed to be reasonably dry around here, although I thought I heard rain on the roof early this morning. As I had already “snoozed” my alarm several times, making it a little late to go for a run before breakfast, I used this as an extra excuse to simply get dressed and walk into the village for the Sunday paper instead. As it turned out, if it had rained it had already given up by the time I went out. The day is remarkably dull and damp though.

On my morning runs or walks around the village I regularly meet a number of anonymous (to me) people, whom I refer to with an old-fashioned term as my “nodding acquaintances”. At the moment the greetings are all wishes for a happy new year and polite queries about how Christmas went. One such I met this morning told me he wasn’t going to tell me about his Christmas as it was so miserable. And then he went on to do so anyway.

It transpired that he, his wife and a few other people went to visit a friend or relative in hospital just before Christmas. By Christmas Day all five of them were suffering from sore throats and an annoying tickley, which lasted all over the festive season and beyond. He proceeded to cough just to prove his point. He blamed the hospital visit. Dangerous places! I try to avoid hospitals as much as possible.

Today is the 6th of January and I need to take down the Christmas decorations. One myth is that if you fail to do so by Twelfth Night, then you must leave them up all year or accept a year of bad luck. I am waiting until our daughter and family come round later today so that they can help remove all the stuff from the tree. 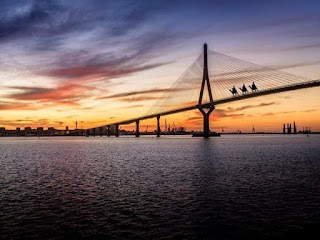 My Spanish sister has sent me a delightful photo of the Three Kings on camels crossing the fine new bridge which goes from Cadiz to El Puerto de Santa María. Every Spanish town has a procession of the kings at this time of year, giving out loads of toothache, sorry, sweets, to all the local children. Seriously, I think the processions are great but I have witnessed such parades and seen children equipped with carrier bags which they fill with sugary booty. Some of the magic is lost in the mad scrabble to grab as much stuff as possible!

Here in the UK we largely ignore the three kings, apart from singing wonky versions of “We three kings of Orient are”. We do, however, often have Santa on his sleigh on the back of a decorated lorry driving through many town centres just before Christmas Eve. One of my daughter’s neighbours takes part in one of these processions. He shares a birthday with our smallest granddaughter and feels a special affinity with her as a result. So this Christmas, on his way to the procession, dressed up in his Santa suit, he knocked on my daughter’s door and ask to speak to the tiny girl. She was a little overwhelmed and shy but managed to thank him for her present. A little bit of magic.

Not all presents are magical, some are just gimmicky. Here is an (exaggerated) example from The Daily Mash:-

“A WAFFLE iron received as a Christmas present has prepared the fourth and final waffle it will make before spending the rest of its life in a cupboard.  The Breville-brand ceramic waffle iron, bought on a whim, has turned out tasty waffles enjoyed by the whole Logan family but that is not enough to save it.
Tom Logan, aged 41 and the receipient of the gift, said: “Yeah, it’s brilliant. Hot fresh waffles for a fraction of the price you’d pay if you were out. You have to make the mix though. “The great thing about waffles is they go with everything, so you can whip them up whenever. You need lots of toppings though. So I’ll have to wait until I’ve got some stuff in. “It’ll go in the cupboard for now, between the panini press and the breadmaker, but I should imagine I’ll have it out again next weekend. If not sooner.”
The iron will spend approximately two-and-a-half years in the cupboard before being wrongly assumed to be broken and taken to a charity shop which rejects it for having no valid electrical certificate. The fourth waffle brought the total cost per waffle to £9.92.”

We once had an electrical device for making toasted sandwiches. It made lovely toasted sandwiches but was a real pain to clean afterwards. We got rid of it long ago. Nowadays I use a sort of mesh affair in which you envelope the sandwich you propose to toast and put it in the toaster. Any mess (and there is usually very little) can be easily washed out of the mesh along with the rest of the washing up.

A little bit of cheap magic! And it is small enough to be popped into bread bin ready for the next time you need it.
Posted by Anthea at 06:35