About ten years ago we discovered a restaurant in Pisa called Numero Undici, so called because it was located at number 11 of whatever street it was on. The unique selling point of this restaurant was that it had no waiter service. You went to a counter and ordered your food, selected your table and set out your cutlery and then went back to the counter to collect your food and pay. I say table, but mostly they were longish refectory-style tables with benches. It was cheap, the food was good and it was patronised by lots of students and some tourists who had read the right guide books.

Today we lunched at This and That in Manchester, which works on a similar principle. From the counter you get rice and three dollops of good curry, according to your choice, for a very reasonable price. Onion bhajis, samosas and naan bread add a little extra but you still eat well for under a tenner. All the water you can drink is available for free but there are cans of soft drinks to purchase if you must. Presumably you could eat veggie or even vegan so long as you don’t mind the veggie curries being in close proximity to lamb and chicken!

Veganuary is in full swing in the country, of course, with lots of people determinedly trying a new lifestyle ... but only for a short while. Proper vegans probably sneer at the idea of temporary vegetarianism/veganism. But some vegans do go on about it quite a lot, even running to adverts on buses, and desperately trying to convince us all tomlove like them.

I read about the Shropshire deputy council leader, Steve Charmley, who said in a series of tweets that he wanted to “stop this vegangalism” after a number of Arriva buses in the county featured ads encouraging people to stop eating meat and dairy.

Buses, he said, should not carry adverts promoting vegan lifestyles in counties that were “built on agriculture”.

“C’mon Arriva Salop it’s a disgrace to run this advert in Shropshire,” the longtime former dairy farmer tweeted. “You are being used to promote the fake news of vegangalists! If it was a political poster it wouldn’t be allowed.”

There’s a nice new word for us: vegangelism!

On the subject of words, it is really easy to make mistakes with a keyboard. Back in my teaching days, my students regularly turned into “studnets”. A certain Daniel Taylor was writing about mistakes in news reports. This was in a sports report, pointed out to me by my husband as I ignore the sports reporting. Daniel Taylor wrote:

“Sometimes it is your own carelessness, sometimes it is an error during the editing process and sometimes I haven’t the foggiest, if I can alert you to a recent humdinger from the Guardian’s corrections and clarifications page acknowledging, courtesy of one reader, that our recipe for “spaghetti with radicchio, fennel and rosemary” had one problem – namely that it did not, in fact, contain spaghetti, fennel or rosemary.

Some newspapers have their systems set up to change words automatically for their own style preferences – hence the unfortunate occasion when Matt Holland, the Republic of Ireland midfielder, ended up in a match report as Matt Netherlands – whereas the list of copytaking cock-ups is the stuff of legend from the days when press box routine involved dictating your match reports through old rotary‑style telephones and relying on the person at the other end of the line to take it down accurately.

The classic story is the time Wales were playing in Latvia and one of the copytakers on duty was not entirely up to speed when it came to the names of the players, in particular the line that Rush and Hughes were up front – resulting in a match report that had a Wales attack led by Russian Jews.”

Oh, the fun and games to he had in the days before internet! 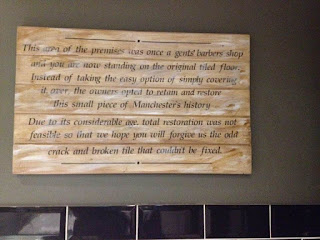 After we had eaten today, we went for a drink at the Lower Turk’s Head, just round the corner from This and That. There I visited the ladies’ toilets where, to my surprise, there was a double cubicle as well as single ones. Now, I know we ladies are famous for going to the loo together but actually sitting side by side and chatting as you pee is going a bit too far.

There was also a notice on the wall informing us that this part of the pub used to be a barber’s shop and still had the original floor. A very nicely tiled floor it was too. And a very interesting bit of information.

But what I want to know is this: If that bit of the pub used to be a barber’s shop, where did the ladies go to pee?
Posted by Anthea at 10:05