When our daughter set off to drive her family home yesterday evening she noticed something odd and phoned us. (I hasten to add that she has hands-free phone facilities in her car.) She had driven up the road and turned around. As she drove past our house again she saw a neighbour apparently telling a man with a large cardboard box that he could not set up house in the alleyway between the houses. Our daughter just wanted us to be aware that there was the possibility of our waking up this morning to find a squatter in the garden.

I don’t know where he went but there was no sign of him this morning. Oddly enough, yesterday afternoon we had seen a man in the village with what seemed to be a sleeping bag stuffed in his rucksack. Was it the same man?

We are a bit off the beaten track for rough sleepers. As a rule they are more likely to be found in town and city centres. It’s not quite like Orwell’s era of rough sleepers wandering the countryside. 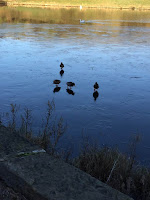 Last night was a bitter cold night for rough sleeping anywhere. Even as our daughter and family left in the early evening the temperature was down to zero and the sky was clear and star-filled, suggesting a further drop in temperature. When I went out running first thing it was about -2. On one lane a driver slowed down and opened her window to warn me to go carefully as there was a lot of ice just a bit further along. That’s what I like about living around here!

I managed to avoid skating, which is more than can be said for the ducks on the millpond. The swan, who was back again today was sticking to the bit that had already thawed. 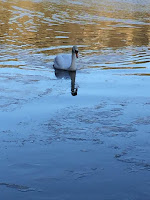 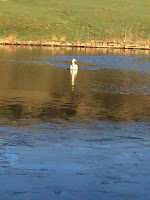 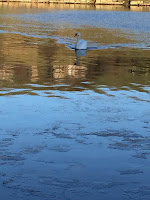 By lunchtime the temperature was up to a massive three degrees - not exactly warm! - and predicted to descend again. It’s a beautiful blue-sky day, ideal to go out walking. Snow is forecast for tonight and tomorrow. From quite early this morning I have been receiving messages from a friend from the Italian class. He travels in to Manchester from Wrexham, where snow is also forecast, and he is worried, not so much about getting to Manchester but about getting home again afterwards if the snow arrives in the amounts promised!

It’s quite hard to drag yourself out of bed on these cold morning, which is an unusual situation for me to find myself in. I am usually up and running quite early and feel that I have missed something if I don’t get out and about first thing. Adrenalin junkies rule, OK!

I am not as bad as some. I was reading about the Olympic gold medal winning cyclist Victoria Pendleton, who apparently has thoughts of suicide after reaching the olympic heights. Nothing left to aim for! She came through it, retired from professional cycling and want into horse riding, and jumping and racing, instead. This is not uncommon, it seems. High achievers in sport are drawn to further competition and challenge. Victoria Pendleton has also had a go at climbing Everest. The runner Usain Bolt tried, unsuccessfully, to become a footballer. Another cyclist, Sir Chris Hoy, became a motor racing driving. Sprinter John Regis attempted to qualify for the British bobsled team. The Rower James Cracknell had a go at breaking records by cycling across America. Andrew Flintoff and Rio Ferdinand tried to become professional boxers.

Crazy people, all of them! They make my adrenalin-junkihood appear extremely mild!
Posted by Anthea at 05:21