A bank, my bank, well, like most banks really, encourages its customers to do online or telephone banking as much as possible. Some of their “products”, such as certain types of ISA or savings accounts, can only be “accessed” online. (Even the terminology annoys me: accessing products indeed!!!) Then they find that fewer people are using their high street branches and so they decide they must close quite a lot of them.

Create a problem. Complain about it. Use it as an excuse to carry out unpleasant actions you might be planning to do anyway!

Bryan Cranston, of Breaking Bad fame, is playing the role of someone in a wheelchair in a film called The Upside. This has led to discussion about who can or cannot play disabled people.

Film makers want big-name stars. There are extremely few disabled big-name stars. Ironically enough one of these, though still relatively small-name I think, is R.J. Mitte who worked with Bryan Cranson in Breaking Bad. He played Walter White’s son, who has cerebral palsy. The actor himself has mild cerebral palsy but even he admits to having to do some research in order to play the character. Yes, that’s what ACTORS do.

But it’s hard, apparently, for disabled actors to get the breaks and reach big-name status.

Someone on the radio said it was a “systemic and continuing problem”.

What a load of rubbish!

David Davis has signed up to earn £60,000 for 20 hours work a year as an external adviser to manufacturing giant JCB. The former Brexit secretary, who quit in 2018, will earn the equivalent of £3,000 an hour for the role, which was revealed after he declared it in parliament’s official registers of MPs’ interests. JCB’s chairman is Lord Bamford, a Conservative member of the House of Lords, major Tory Party donor and a supporter of Britain leaving the EU.

One wonders what David Davis knows about JCBs. Would he recognise one if he needed to lie down in front of one to protest?

Is the JCB company even getting value for money? For £60,000 they get 20 hours work! They could have employed three full-time workers on £20,000 each. Just a thought! 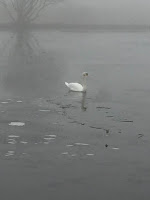 Back in the real world, today is an almost complete turnaround from yesterday. It’s still cold. The snow is still in the ground. The puddles are still frozen. Even the local mill ponds still have a skim of ice on the surface. But the clear, blue-sky crispness has gone to be replaced by chilly mist, which moved in late yesterday and stayed. It’s probably not quite freezing fog but it comes close.

On my run this morning I saw a swan on one of the mill ponds, moving serenely through the thin ice like an icexbreaker, or possibly the Titanic. Where had it come from? I know there are swans on the canal in nearby Diggle so maybe it was flying around and got lost in the fog.

Our government seems to be flying around in the fog in similar fashion. As more and more companies consider fleeing the sinking ship, I wonder where we will end up. Even if Brexit is cancelled, will the companies who have moved headquarters bother to come back? Crazy times!
Posted by Anthea at 05:23