Apostrophes and other nonsense.

This is a notice I spotted outside a local pub. I was struck by the number of totally unnecessary apostrophes. 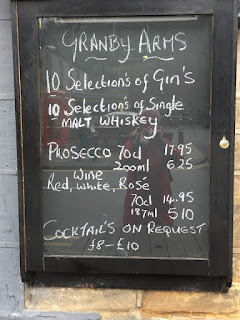 My Spanish sister says she spots them all over the place in Spain, wrongly used of course, but she didn’t think they were so prevalent in England. This is a sign of how long it is since she has lived in this country. It is also a sign of how standards have slipped. There always were what used to be called  “grocer’s” apostrophes but nowadays there are so many signs all over the place that rogue apostrophes abound.

When Phil came home (and, incidentally, my hero, fixed the lighting situation, which was, as I suspected a blown fuse) he told me about the Holiday Inn in Doncaster, where he has been playing
chess this weekend. There they offer a “selection of panini’s”. Whoa! Double whammy fault!

“Panini” is already plural, the singular being “panino” and then there is that APOSTROPHE!

I am relatively forgiving about the “paninis”. After all, you can’t expect everyone to be an expert linguist. We linguists get a bit picky about such things though. And rogue apostrophes drive us language and grammar obsessives wild!

I trust everyone noticed my correct use of “we linguists” and “us obsessives”. Another obsession!

Between you and me, another thing that really annoys me is when people say “between you and I” or “for Mary and I”. Just think what you would say if there were not another person involved. Nobody says “for I” or “with I”, for goodness sake! it’s not all that hard!

Okay! Another rant over!

Here are some more January activities to sign up to:

Dystopianuary - reading only books set in a dystopian world. Example: The Hunger Games. (Or any news report on how Brexit is going!)

Libranuary - reading only books that contain one or more librarians. Example: The Name of the Rose. Or possibly La Sombra del Viento.

That’s all for now. Today is singularly wet and windy. I have run round the village and bought the Sunday newspaper. I have no need or intention to poke my nose outside again.
Posted by Anthea at 03:19