I read about a secondhand bookseller in the Yorkshire Dales who has been much criticised for his rudeness to customers. His rudeness in general, it seems, is well known but someone went and complained to the local council about him when he called that particular customer, who came in as the shop was about to close and insisted on having a chance to browse, a "pain in the arse". Not the best customer service, perhaps, but then he is a Yorkshireman and they do have something of a reputation for being curmudgeonly. Before anyone takes issue with my regionism, I hasten to add that I am half Yorkshire myself!

Stephen Moss, commenting about this in the Guardian, reckons that it is no surprise that this chap is the "bookseller from hell". Secondhand booksellers, he maintains, have a hard time of it, much of their clientele having been stolen by internet sales. They get very upset when people go into their shop quite obviously just to get out of the rain. He also believes that secondhand booksellers don't really want to sell books. They like books, not people; the books in their shop are their friends and they do not really want to lose them. All of these factors, he says, account for their being grumpy.

While I can agree with some of Stephen Moss's arguments, I have to say that the ones we have around here are for the most part friendly. (There is, however, one that we no longer go into very often, ever since Phil managed to demolish some of their shelving with his rucksack - embarrassment beats the desire to find a bargain.) And I think he may have an over-romantic idea about booksellers' attachment to all their books.

Anyway the "bookseller from hell" charges people 50 pence to go into his shop. If they buy a book they get their 50 pence back. Now, the Lello bookshop in Oporto, the oldest bookshop in that city, charges €3 if you want to enter their premises. This did not used to be the case but they found that the shop was often so full of people who wanted to take photos of the magnificent interior that book buyers, i,e, customers, could not see the shelves. And, as in the Yorkshire bookshop, if you make a purchase, the entry fee is deducted from the price.

I have visited Lello a couple of times, the first time for free, and I must say it is worth seeing. While the Yorkshire bookshop appears to be housed in a fine old building, I doubt that the interior is quite so splendid as Lello's. Maybe that is why the entry fee is 50 pence as opposed to €3! Maybe the bookseller should be more grateful for custom.


On the subject of gratitude, we were given a basket of hyacinths as a Christmas present. The flowers are blooming beautifully. They are a stunning hyacinth blue. However, they have been relegated to the kitchen as the perfume is quite overpowering. Having found that Phil was opening the living room window to let the smell dissipate, I decided that radical measures needed to be taken. He still harrumphs over breakfast. Maybe he is in touch with his inner grumpy Yorkshireman. 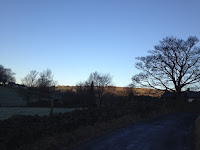 And finally, I would like to know how we went from this 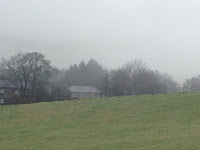 over a matter of days.

Maybe it's because we used to be part of Yorkshire!

And why do the weathermen seem to think that foggy gloom is an improvement on crisp and cold but bright and sunny?