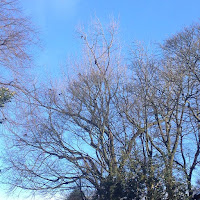 Despite a rather gloomy start to the day - lots of cloud and a hint of sleet - the weathermen proved to be right and the day improved. So I decided to put aside the other types of gloom and nonsense that are around:- 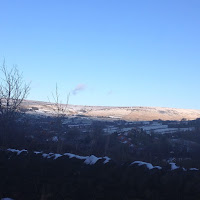 So, as Phil was off playing chess somewhere and tomorrow promises rain, rain and more rain, I wanted to take advantage of the sunshine. It did cross my mind that I might jump on a bus and go for a stomp around a nearby reservoir. However, by the time I had done some washing up and tidying up, made a few phone calls and accomplished other small but time-consuming tasks, I realised that I would probably get there in time for the sun to go over the hill.  So I walked the long way round to the local Tesco: along the Donkey Line and then via the top road that looks down on Uppermill and goes past the golf course.


I was advised by one helpful soul that parts of the Donkey Line were very icy. Like glass, he told me. He exaggerated! Nothing like as icy as the occasion some years ago when our granddaughter, then 13, and a friend walked home from school that way in seriously unsuitable shoes and took well over an hour to cover a twenty minute stretch! Parts of it were very muddy today though. 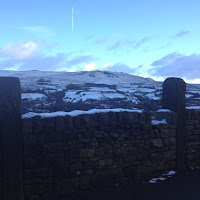 Lots of people seemed to be using the top road as an alternative to driving through Uppermill itself. I kept having to flatten myself into the banking to,avoid being crushed on this narrow road, really not built for today's large vehicles. Fortunately for them, they all seemed to be going in the same direction. No difficult reversing today! 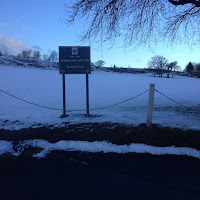 On the golf course, the greens had turned into whites. Does anyone even play golf in the snow? Maybe with coloured golf balls! possibly that explains the number of cars on the road. Perhaps they had all gone up to the golf club and decided against a game after all.

And so I stomped along, picked up some stuff at Tesco and then totally mistimed the buses back. Fortunately I was not carrying much so I chose not to wait at a cold bus stop.

A longer walk than intended but, boy, did I feel virtuous!
Posted by Anthea at 08:59