Getting the snow drift!

The weathermen have predicted a cold snap, as they like to call it, for the end of the week. Snow is possible. It will not, they assure us, be as bad as the cold weather currently afflicting the south of Europe. Imagine the plight of those living in tents in the refugee camps there!

Even though we know there are ski resorts in all sorts of places in southern Europe, somehow we don’t expect the fountains of Rome to freeze! And yet I remember one Christmas we spent in Florence; we had blue sky and sunshine but the cold was intense. And, yes, I still missed that blue sky when the cloud came in and the temperatures went up a little.

The first time we went to Italy we were in Taormina, Sicily, at a language school. It was Easter time; there was still snow on the upper slopes of Etna but down in Taormina itself we could stroll around in light weight clothing. Some people even went in the sea at Giardino Naxos. And now I have pictures of the Greek theatre in Taormina covered in snow. Who’d have thought it?

Coincidentally a friend tagged me into a post from the Manchester Evening News with a link to a set of pictures of Manchester in the snow, going back years and years. Pictures with the old horse-drawn trams in some cases. She tagged me in as there were pictures of Saddleworth, where we live. I was particularly impressed by the photos of Diggle, not very far from us, with enormous snow drifts in 1947. Before my time but Jack, the old chap with the little dog called Rosie, my morning run nodding acquaintance, had told me all about this the last time we had snow. 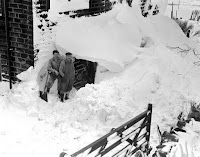 Back in 1947 he was a boy of 9 or 10 and he remembered the huge amount of snow that fell that winter. There was so much in Delph, he told me, that the council sent men with spades to clear the drifts and load the snow onto lorries. it was dumped on waste land just outside Oldham town centre where a huge snow mound was formed. Well into the spring of 1948 Jack and his mates used to go and slide down the artificial hill, which proved slow to melt.

Whether or not this apocryphal tale is true, it reminded me of my mother’s stories of her childhood in a small Yorkshire village where they dug pathways through the snow drifts connecting houses to the post office, the village shop, the school and so on. snow drifts you could not see over! I was all the more impressed as in my childhood bit of Ainsdale, Southport, we did not see snow. Frost and ice, yes, but if it ever snowed it never stuck. I can remember the sea freezing one year; well, the beach is so long and shallow that when the tide came in and the cold struck, it just froze into place. But it wasn’t a regular occurrence.

As with hills (Southport is notoriously flat), it wasn’t until I went away to university in Leeds that I really knew snowy winters! We have, however, experienced being snowed in while living in our first house in Delph: quite exciting provided you have sufficient supplies in hand and can look out at the Christmas card scene from a warm interior. not quite so spectacular as snow drifts up to your waist but perhaps more beautiful in a way was the day the wind blew the snowstorm against our front door and then the layer of snow froze. Opening your front door to find the sun shining through a sheet of frost patterns is quite astounding! Nothing so spectacular has happened in our current house, although we did once build an igloo in the back garden.

And so I wait to see what kind of weather adventures await us this time!
Posted by Anthea at 10:17