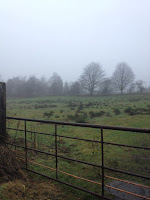 Today is Blue Monday. It must be true. I read it in the Guardian newspaper. Every third Monday in January (except when someone decides it's going to be the second Monday) is dubbed Blue Monday, the most depressing day in the year. Well, here it's more of a Grey Monday; the cloud has come down and my first thought was that someone had STOLEN my Monday.

Mind you, if I wanted to feel blue, I could simply read even more stuff about Donald Trump in his interview with Michael Gove. I'm sure they got along famously. I stopped with Trump's opinion on Brexit - a good thing, in his opinion, and an example likely, indeed recommended by Trump, to be followed by other European countries - and his analysis of why it happened:

“People, countries, want their own identity and the UK wanted its own identity. But I do believe this: if they hadn’t been forced to take in all of the refugees, so many, with all the problems that it … entails, I think that you wouldn’t have a Brexit.”

When did we take in too many refugees and who forced us to do it? Can we cope with four years of political analysis of this calibre?

Anyway, back to Blue Monday: I would like some days of a better colour. They all seem to be blue or black at the moment and all of the colour-specific days are to do with spending money. Blue Monday, it seems, was invented some ten years or so ago as part of an advertising campaign for a travel company. The idea was that you could cheer up the January Blues (there you go, a whole month this time!) by booking a holiday. And since then the concept has been used to persuade us to buy clothes, shoes, cars and just about anything you choose to name.

Has anyone used it to promote the sales of books? I wonder! When you buy clothes to cheer you up, you just end up with less space in your wardrobe and, in some people's wardrobes that means clothes which are never worn and years later still have the price label on them! Even though buying books also adds to your clutter collection, at least on a grey day in January if you have a new book to read you can have a bit of instant escapism. Just curl up in your favourite chair and start reading! And it's cheaper than a cruise!

Another way to escape the blues is "hutting". Basically, this is having a hut to which you can escape and think and write or be creative in your own chosen fashion. One of the posh names for a hut is a "bothy". Lots of famous people had them: Roald Dahl, Dylan Thomas, Virginia Wolfe. Gabriel Oak in Hardy's "Far from the Madding Crowd" had one. And now, thanks to some change in Scotland's building regulations, more people will be able to build huts, and even go and live in them, where previously they were not allowed to do so.

Where better to indulge in a bit of Danish "hygge" (basic meaning: snug cosiness) with friends, or presumably on your own with the good book I mentioned earlier? And you can eat lots of organic food, being "folkeligt". This is apparently the latest buzzword to come from Denmark, where half the population eat organic food, a much higher proportion than in the UK. They really like organic stuff over there. This is something that I read the other day: "The extent to which Danes have embraced organics is captured by Økodag, or Organic Day, in the spring when almost a quarter of a million people don wellies to witness the so-called “dancing cows” as the animals rush back into fields to graze after the long winter."

Now, I bet that has got rid of some Blue Monday blues!
Posted by Anthea at 04:53