Getting away from the snow! 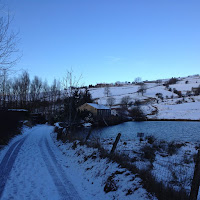 Well, the promised snow finally arrived sometime yesterday evening. A young friend, who lives a bit closer to the snow-line and gets rather more, deeper and earlier snow than we do was posting her hopes that today could be a snow day. She works in a school and was hoping that her place of work would be closed because of students' difficulty/inability to get there. Today is bright and cold and it looks a bit like a Christmas card out there but I don't think it merits closing the area down. 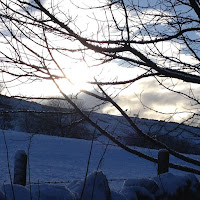 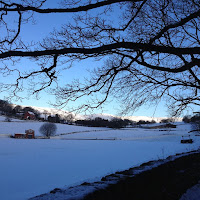 My daughter, however, tells me she has not sent her children to school; there were no buses first thing and she did not want to take them by car only to be told an hour later to go and collect them as the school was closing. Inevitably she has heard form them since, letting he know that her children have been marked absent. this despite her having sent a message explaining the situation. sometimes you can't win. 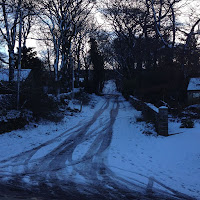 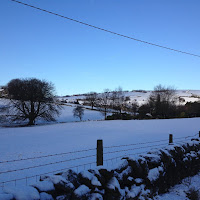 Maybe my  posting friend just wanted to stay home and watch tv. A little bit of binge-watching never did anyone any harm. Not that I have heard about as yet anyway. No doubt, some time soon somebody publish an article about the problem of addiction to box sets! 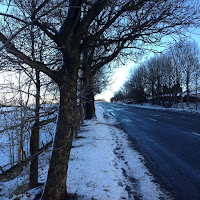 I like the way binge has progressed from simply meaning over-eating to overindulging in all sorts of things. The British became famous for binge-drinking, usually in an embarrassing fashion in Mediterranean holiday resorts but also at home on a Saturday night! And now we have binge-watching, a development I find strange when you take into account that films are rarely over 90 minutes long because they think people won't sit and watch something for much longer than that.

On the radio last night they discussed this phenomenon. Really they were reviewing a new Netflix series, The AO, the story of a young woman who disappears and then returns home seven years later with mysterious new abilities and a secret mission in mind. An interesting feature is that the episodes are all different lengths. The maker of the series was getting very excited about being free from the constraints of working for mainstream television where all episodes have to be 59 minutes so that they can fit into the drama slot before the ten o'clock news.

In the course of the programme they discussed the fact that more drama is watched via Netflix or similar streaming than on mainstream television. This is the new mode. You can watch as much as you exactly want when you want. Some people even set their television to record the whole of a drama series, broadcast in the traditional way, and do not watch any of it until the whole series is finished precisely so that they can watch watch it the new way. And it's not just a matter of watching a couple of episodes at a time. The thing to do is the set yourself up with supplies of snacks and then watch a whole series in one fell swoop.

Now that is what I all escapism! Binge-escapism?
Posted by Anthea at 04:41