Goings-on in Manchester ... and elsewhere!

In the late afternoon yesterday, I set off for Manchester. There was a plan; there usually is. I was going to meet our eldest granddaughter when she finished work, have a bite to eat with her and then see if I could find a friend who was headed for the anti-Trump-Muslim-ban protest, before going to a book club meeting. Quite a schedule, in fact! Of course, the plan quickly went wrong; they often do. My granddaughter changed her mind; she decided to go straight home and do some sorting out and tidying up, maybe because her boyfriend was not around. So we had a chat on the platform of the tram stop and I sent her on her way and went and found myself a sandwich in a cafe. 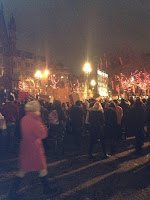 Then I found my protesting friend earlier than expected and we made our way to Albert Square, collecting other friends of hers along the way. Albert Square was very full. Passionate speeches were being made and people were cheering them. Unfortunately we could not make out more than an odd word of what was being said. If there was a public address system in place, it was not working well. We were at the edge of the crowd, partly because we arrived after the crowd was already established and also because my friend has some mobility problems and needs to sit down from time to time. I did worm my way into the crowd at one point but I still could not make out what the speakers were saying. I think you needed to be in the front five rows to hear properly.

This was rather a pity. Not just because it would have been good to hear all the speakers but because I later found out that one of them was a young friend of mine. I would have particularly liked to hear what he had to say. So it goes.

When the protest gathering turned itself into a protest march, setting off along Deansgate, I think, I went in the opposite direction to meet another friend at The Briton's Protection, the pub where the (aptly name for the times we seem to be living in) Winston Smith Reading Group meets. We were a small group; our organiser has been having difficulty finding a time to suit all the interested parties. It was probably just as well we were not more numerous as one of the back rooms of the pub was booked for a private party, incidentally providing us with free left-over sandwiches later in the evening. 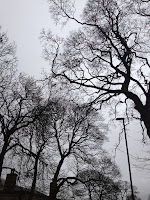 So we settled into a corner and had a good chinwag about "Diary of a Nobody". My nicely illustrated version of the book was much admired. We all agreed that the book was very funny, in a very British way, or perhaps a European way but certainly not an American way. Reviews from the time of the book's first publication show that our transatlantic friends could not really grasp what we found so amusing about it. We may speak the same language (well, sort of) but that does not mean we are exactly the same. Which is probably just as well really.

Today has dawned wet and gloomy. The paper and cardboard collection I put out for recycling will be papier-maché by the time the binmen come! Modern recycling problems! I suppose I should request a blue bin (specially provided by the council for paper and cardboard) instead of the old-fashioned blue bag (also provided long ago by the council) but it would mean another unsightly bin in my garden. There is already a grey bin (general rubbish) and a brown bin (glass and plastic) which have to sit in the front garden, and in fact have to be put by the gate, as the binmen will not go and retrieve them from the back garden - not in their job spec, apparently! It's all because time management and efficiency stuff!

The news is as gloomy as the day. President Trump has sacked the acting Attorney General for telling justice department lawyers not to defend his executive order banning entry for people from seven Muslim-majority countries. She is accused of being unpatriotic, betraying her country. It begins to seem that if you do not agree totally with the new president you risk losing your job. So long as it is only your job you risk losing, then I suppose that is something to be grateful for.   Here is a link to the estimable Paul Mason's view of the UK's situation vis-a-vis the Trump rule of law.

And finally, on a lighter note, I have a new phobia definition to add to my collection. Bathmophobia is a (presumably irrational) fear of stairs or slopes. This apparently explains Theresa May's willingness to hold Donald Trump's hand during her visit to the White House?  The new POTUS, unafraid to fire off executive orders and to fire people from public office is afraid of walking down stairs. Who knew?
Posted by Anthea at 04:59