Some thoughts on food, demonstrators and reactions to change.

Chestnuts - the food programme on the radio has been going on about them, mostly as an Italian thing and the importance of sweet chestnuts in cooking. What about the magosto, the chestnut festival in mid-November in Spain? Also in Portugal. That’s what I want to know. No mention of it at all.

France was mentioned with the comment that in France they began as a food for the poor. Only later did they become a trendy food item. We discussed this sort of thing during our weekend jaunt. One of our bunch had enjoyed goose barnacles. We have tried them in Galicia where they are harvested in dangerous cliff to sea conditions and sold to restaurants at high prices. Like snails and frogs legs, these must have started as food for those who had nothing else. If you have no food, no crops to harvest, no vegetable plot of your own, you eat whatever nature throws up as a possible source of nutrients. And now those things are sold as gourmet dishes for those who can afford to buy them.

Personally, I think goose barnacles are over-rated. I feel the same about oysters, by the way.

Across the Channel, France sounds as though it is building up to a riotous Christmas. Are we keeping such events at bay by opening more and more food banks? And then there is this sort of thing: “baby banks” providing essentials for mothers, especially very young mothers, who simply cannot afford the stuff they need.

During our free-ranging conversations on Friday evening, one of our group talked about having been involved in presenting an award of some kind to an enterprising young scientist. They were having some problems with student demonstrators who felt that the award should not be given at all as the patrons of the award were connected to someone who had been a prominent Nazi during the Second World War. The patrons found a solution: they went out and addressed the student demonstrators and invited them to come in and join the awards party. The promise of lots of free food took away all their wrath.

It crossed out minds that Monsieur Macron might try to use a similar technique with the gilets jaunes demonstrators. Probably not really feasible.

(Language note: on the BBC radio news earlier today one of their newsreaders pronounced “gilet jaunes” as “gilets jeunes” yellow gilets became young gilets! I thought the BBC had people they paid to prevent this sort of thing. Mind you, they have difficulty differentiating between “wonder” and “wander”, so what hope to we have of their pronouncing foreign words properly.)

Phil took me to task this morning for not mentioning in yesterday’s post that we also visited Manchester Art Gallery, always an enjoyable experience. The member of our group who has been longest away from Manchester did quite a lot of complaining because a fair number of paintings which she remembered from her youth had disappeared. Our oldest granddaughter is only 21 and even she does the same thing; she has favourite paintings which have, presumably, been loaned to other galleries and she is seriously miffed and disgruntled to be unable to locate them.

Most of us are a little reluctant to change. There is something reassuring about continuity. However, our granddaughter is probably an extreme case. She was quite furious years ago when I repainted the front door, changing it from black and white to a fine royal blue. When we replaced the old three piece suite with new furniture she almost refused to visit us. And when we removed the old open fire in the living room and installed a very realistic-looking electric fire she walked into the room, took a look around a declared, in quite furious tones, “Something is very wrong here!”

She seems to have adjusted over time and has no qualms about expecting us to accept that her hair, naturally a light brown colour, changes from pink to purple to blue on a whim.

Finally, here is a picture of Emmeline Pankhurst, a photo-mosaic made up of many photos of women, by an artist called Charlotte Newson. It’s on display in Manchester Town Hall. 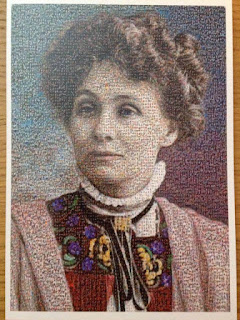 Worth seeing in its full glory.
Posted by Anthea at 08:01