I have just heard Theresa May on the radio being very optimistic about her “robust” discussions with Jean Claude Juncker about the Brexit deal. She seems to think some tweaking is possible. But reports from European politicians suggests that they have no,plan to help her. So we seem to be still waiting for the vote.

Talking of votes, I went to meet a friend today in Manchester so that we could go to the unveiling of the statue of suffragette Emmeline Pankhurst in St Peter’s Square. 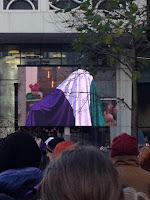 Lots of people, hundreds(?), maybe thousands (?) marched from the People’s History Museum to Saint Peter’s Square but we chickened out of the march, mostly because my friend has problems with her feet and also because when we planned to meet we were very unsure of what the weather was going to do.

In the event the weather was fine and cold. There was frost around when I set off from home earlier. 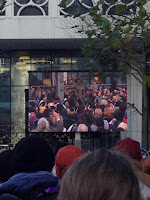 By the time we reached St Peter’s Square, it was already very full and we had to wander around a little to find a place where we could see what was going on. It’s a good job they had erected a screen. Even then my friend had problems as she is rather short. But there was some fine singing going on, courtesy of a women’s choir and students from the Royal Northern College of music. 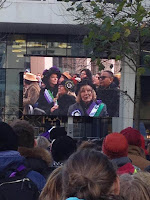 Lots of green, purple and white banners and rosettes were on show. A few women had come dressed as suffragettes. Various dignitaries, including Helen Panhurst, great graddaughter of Emmeline,  spoke about the work involved in getting the statue erected - lots of fundraising - and about the importance of raising today’s little girls to be aware of the struggle women had to get the vote, urging all of us to register and to use our vote. 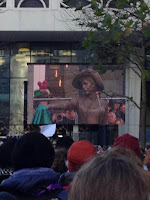 Eventually they pulled the drapery off the statue and there she was: Our Emmeline in all her glory.

By then my friend had given in to her cold feet and gone off to catch a tram homewards. We agreed to get back in touch in the new year and perhaps manage to meet between the various travels that both of us have planned.

So I went off on my own to do a bit more Christmas shopping. There is an outside chance I might have gifts for everyone in time for Christmas Day.

I tried to organise a time when my daughter and I can do some Christmas prep together but she is feeling decidedly disorganised, not surprising with work, a toddler and a couple of teenagers to deal with! At the moment it looks as though she will have no time until next Friday, which is dangerously close to the day itself!

Here comes a Christmas legend, a rather “sweet” one:-

“A candy maker in Indiana wanted to make a candy that would be a witness, so he made the Christmas candy cane. He incorporated several symbols for the birth, ministry, and death of Jesus Christ. He began with a stick of pure white, hard candy. White to symbolize the Virgin Birth and the sinless nature of Jesus; and hard to symbolize the Solid Rock, the foundation of the church and firmness of the promises of God.
The candy maker made the candy in the form of a “J” to represent the precious name of Jesus, who came to earth as our Savior. It could also represent the staff of the “Good Shepherd” with which he reaches down into the world. Thinking that the candy was somewhat plain, the candy maker stained it with red stripes. He used three small stripes to show the stripes of the scourging Jesus received by which we are healed. The large red stripe was for the blood shed by Christ.”

Quite why he flavoured it with mint remains a mystery.

We had this legend in Italian in my last Italian conversation class. For the Italians, who call Jesus Gesu, the initial letter thing does not work. So they regard the candy cane as being a representation of the shepherd’s crook, which actually makes more sense when you consider how you hook it onto the Christmas tree.

I now have a tree, by the way. Our daughter turned up with it yesterday evening, a nice little rooted tree, just the sort she knew I was looking for. All I have to do now is decorate it!
Posted by Anthea at 12:45