Alternative suffragette statues. A bit of a rant about language. And recipe ideas. 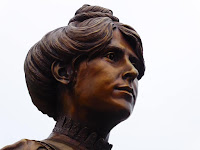 The statue was of Oldham’s home-grown suffragette, Annie Kenney. She was born in Springhead, not very far from where we live now, and was the fourth of twelve children. At the age of 10 she started work part-time in a cotton mill while still going to school. By the time she was 13 she was working full-time, doing 12-hour shifts from six in the morning. She worked in the mill for 15 years, was involved in trade union activities, continued her education through self study and promoted the study of literature among her work colleagues. A busy woman! 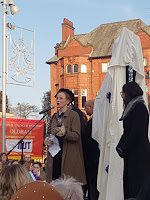 She and her sister Jessie heard Teresa Billington-Greig and Christabel Pankhurst speak at the Oldham Clarion Vocal Club in 1905 and after that she became actively involved in the Women’s Social and Political Union. That involvement led to her being jailed 13 times in total.

My friend, whose mother also worked in cotton mills in Oldham, said she was moved to tears by some of the speeches during the unveiling.

This from Fitbit, who send me emails about special offers, in the hope that I might decide to update my current Fitbit for something more complicated and more expensive.

First of all, I hate the use of “heart” as a verb. Really annoying!

And secondly this was a promotion for what they referred to as “stocking stuffers”, which implies the kind of extra “small” gift you put in someone’s stocking but which isn’t the main present. Who buys stocking fillers at that price? Stocking fillers are inexpensive but amusing items or sweets or tangerines!

Here’s something else that annoys me. Eva Wiseman, whose writing in the Observer I usually enjoy reading, had been interviewing Nadiya Hussain, the Bake Off winner who has apparently become a national treasure. This last thing must be so because I read it in the paper.

This is the sort of stuff they should be concentrating on in SPaG (Spelling, Grammar and Punctuation) in schools. Clarity in writing, not putting fancy (often invented) labels on parts of speech.

When I was child, I had no idea what figs were. We had fig biscuits, a sort of soggy biscuit case filled with mushy brown stuff with tiny seeds in. They were usually served up as a kind of treat but we children never really liked them. In books for small children, the kind of books with brightly coloured pictures of fruits of various kinds, figs did not appear at all. And you certainly never saw them in shops in the UK. Mind you didn’t see mangoes either.

In fact it wasn’t until I was a teenager that you started to see peppers, and to start with there were only green ones.

So it wasn’t until I was getting on in years that I saw a genuine fig in the flesh. What a nice surprise! And, indeed, when I first saw a fig tree I suddenly understood all those references to fig leaves being used to cover up naughty bits on naked bodies. Fig leaves are the perfect shape.

I now have a small but growing collection of recipes involving figs. Figs roasted in a honey and red wine sauce with minced sage leaves as a side dish works very well. And fig clafoutis is a tasty alternative to cherry clafoutis.

Today Jay Raynor in the Observer has provided me with a recipe for baked figs with pistachio biscuits, which looks very interesting. A possible addition to the Christmas Day dessert collection. Nobody in our family eats Christmas pudding so there is little point in serving it.

I am making a list of the food items I need to buy to feed the gang who will be here on Christmas day. Figs and pistachios look like being added.
Posted by Anthea at 08:17