Yesterday we had a brief bright interlude in the winter gloom. For what seems like weeks we have had rain, rain and more rain. Then along came yesterday with blue sky and bright sunshine. Okay. It was intermittent. The wind kept blowing the clouds over but ot was good day to be out and about for a change.

Here’s the village in the morning sunshine yesterday. 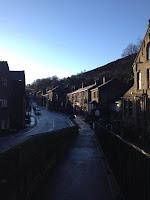 And even the heron turned up again. 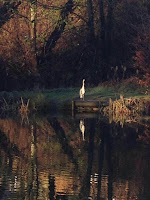 Other people have more serious stuff to contend with. As we stagger towards some kind of conclusion to the Brexit business, EU citizens here who want to apply for settled status keep finding obstacles in their way. As if there weren’t aleady enough problems, they are faced with things like this, reported by one of the members of the Forum for EU Citizens (The Three Million) on Facebook:

“Just wanted to share an issue regarding the EU Exit: ID Document Check app. I had problem with my Samsung Galaxy S7 which was not recognising the app. The problem was that my Google Play account was made when I was still in Italy over 3 years ago so when I tried to download the EU Exit: ID Document Check, Google Play would not recognise it because my account was still registered in Italy. I haven't yet scanned my documents but I have finally been able to download the app! Thanks to my partner who is a little better at phone technology than I am!
So the app can only be downloaded if your Google Play is registered in the UK and NOT abroad!”

So there is even discrimination in technology. Who knew?

Technology rules increasingly large areas of our lives. I watch young people buying their bus tickets with apps on their phones and paying by card for ridiculously small items such as packets of chewing gum. “By 2026,” I read, “it is predicted cash will be used for just 21% of transactions, according to figures from UK Finance. Although rumours of 1p and 2p coins being phased out is a bit of a stretch, wallets or purses could disappear altogether and be replaced by phone covers, according to (Guardian) money experts. Dutch company Mujjo has just launched its line of iPhone cases with built-in wallets that are selling like hot cakes, it claims. Like Sweden, the Netherlands is virtually cash-free.”

This is reflected in the fashion industry by the trend for handbags to become smaller and smaller, just big enough to carry a mobile phone, a card wallet, a comb, a lipgloss and a set of house keys. It just needs women's to start to have proper pockets and handbags can disappear altogether. I don't think accessories manufacturers will  let THAT happpen.

Will ATMs disappear or become rarer, as bank branches have done already? Stubborn older folk who insist on sticking to the habit of paying in cash will be complaining that not only do they have to travel miles to the nearest branch of their bank, but that the same applies to finding a cash machine.

Our children used to be amused by the look of pre-decimal coins, not to mention the old system of pounds, shillings and pence. Hoards of youngsters do not recognise an audio cassette if they see one and have no idea what it was used for. The same will soon be true of CDs and DVDs as more and more music and films are downloaded via streaming. Some time in the future, will wallets containing notes of various denominations also be held up as examples of strange artefacts used by previous generations? And will society have occasional breakdowns like the very recent occasion when O2 stopped functioning?

“Yorkshire-born food historian Peter Brears traced the combination as far back as Victorian times. In Joseph Lucas’s 1871 book, Studies in Nidderdale – Nidderdale being a rural enclave in the Yorkshire Dales – a passage reads: “On Christmas Eve one Yule cake is given to each member of the family, along with a piece of Christmas cheese. As a rule, part of it is left for Christmas morning, and eaten at the breakfast.”
To some, particularly southerners or others unversed on the matter, this might sound an odd medley. But cheese lends itself to fruit (see: chutney) and back then marzipan and icing, perhaps less satisfactory accompaniments, wouldn’t have featured. Today, the partnership is not confined to Yorkshire alone. At The Courtyard Dairy in Settle, Yorkshire, which first found the passage above, cheese to partner Christmas cake outsells Stilton during December.”

Now, I can understand the nice combination of cheese and Christmas cake - personally, I am partial to a toasted fruit teacake with a slice of cheddar cheese - but I can’t say I recognise it as a specifically Christmas tradition.