Be careful what you say. Other stuff in the news. Christmas trees.

Did Jeremy Corbyn call Theresa May a stupid woman? Oh, he supposedly “mouthed” the words, did he? Do we need a lip reader to verify this? Will the Labour Party need a major investigation to check this? Isn’t politics fun?

The lunchtime news on the radio spent five or ten minutes discussing this! Really! A whole lot of stuff about women in Parliament and how we need to encourage them to be there. Conservative women went on about being proud to have had two women prime ministers. And the Labour Party is accused of misogyny. Even the Speaker is accused of favouring the Labour party and being equally misogynistic.

As a woman, I am not offended by Jeremy Corbyn calling Mrs May a stupid woman. I often call her a stupid woman. The emphasis is on the stupid not the woman! Had JC shouted the words across the house then I could understand the outcry. But it was presumably a muttered aside ... which someone unfortunately lipread. Pretty soon the thought-police will be instituted and we will be apologising for all our thoughts. Would it have been different if he had been suspected of mouthing "stupid man"?

But the debate continues. Here are two tweets from Heather Stewart, joint political editor of the Guardian:

Heather Stewart ✔ @GuardianHeather
Corbyn’s spokesman: “he did not call her a stupid woman, so I don’t think there are any grounds for an apology”. Says JC said “stupid people”.

Heather Stewart ✔ @GuardianHeather
Replying to @GuardianHeather “Lip-reading in these circumstances is always difficult”, says JC’s spokesman. “He is clear that he didn’t say stupid woman”. People claiming he did, should “account for themselves”.

No doubt this will run and run.

The news went on to talk about homelessness. Which reminds me that we had a knock on the door this morning from a young man (possibly homeless, certainly unemployed) selling stuff, sponsored he said by an organisation called Helping Hands. Is such selling legal? I know people around here who have quite aggressive notices telling such sellers not to bother knocking.

This young man claimed to be from the North East. If so, what is he doing in Greater Manchester? Although he has as much right to be here as anyone else. Or did he just adopt the accent in order to sound more appealing?

And the news talked about Kylie Minogue, who is going to be in the “legend spot” at Glastonbury next year. The reporter went on about her having fairy dust which keeps her forever young and appealing. I can’t say the magic works for me. 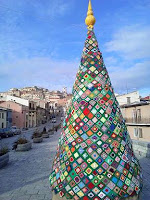 According to this article, we should all be buying real Christmas trees, not using plastic ones. It’s all a question of recycling. You see, I knew I was right always to favour proper trees.

Mind you, I have seen some lovely pictures of trees made out of crocheted squares. This one is in Italy, I think. All very clever stuff! I wonder if I could make one. Maybe next year!
Posted by Anthea at 06:36