A friend sent me Happy 2019 greetings this morning. I can only assume she is getting ahead of herself, anticipating the social media crush there will be at midnight tonight when nobody’s messages can get through to anyone anywhere. The problem is that she has included me in a “group”. This is a social media thing, very useful for sending the same message or the same email to a number of people at the same time.

Usually groups are made up of 6 to 15 people, unless it is a workplace thing, when it includes just about everyone on the staff of an establishment. My friend’s group is purely a social thing, as she is a retired lady like myself. However, her group appears to include just about everyone she knows - well, about 50 people at least. Consequently my phone keeps sending out a little “meep” every so often as masses of people I do not know, and indeed have never heard of until today, send New Year’s greetings!

This is a form of madness! At any rate, it is the kind of thing that can drive a person into madness!

Here is another form of madness. I saw a headline this morning: 200 die in three days on Thailand’s roads as holiday carnage returns. Goodness! Has there been a spate of killings on the roads of Thailand? Were tourists being attacked? Was this another case of local people feeling overwhelmed by foreign visitors? A new form of terrorism? No, it was a matter of people moving around because of the “holidays”, i.e. Christmas and New Year, and the roads being overcrowded and the drivers impatient and incompetent!

My reading of the headline was too Europe-tourist-centred. And there I was thinking I was an open-minded, tolerant citizen of the world!

Finally here is an example of some tiny artwork in various cities around the world, by a Spanish artist, Isaac Cordial. 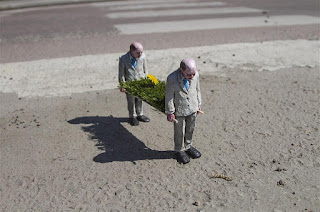 "The Spanish sculptor Isaac Cordal sees the city as his playground. He specialises in miniature street art, producing tiny figures as a social commentary on the spaces they inhabit. “My work is a filter to try to understand and change the world we have created,” Cordal says. His sculptures, about 15cm in height, often represent a social stereotype as a critical observation on capitalism, power and bureaucracy.
In one installation in a puddle in Hackney, east London, for example, a group of men dressed in suits with apathetic expressions represent “a very archaic form of patriarchy, and capitalism”, he says. Cordal first models the sculptures in clay then reproduces them in cement. “As a material, it seems very symbolic because it is one of our most recognisable footprints against nature,” he says. “Today we have turned cities into a kind of natural habitat.”
These tiny cement figures have appeared in cities across Europe, found sitting on top of bus shelters or drowning in gutters, small interventions in the big city." His work can be seen on the Instagram account @isaaccordal.