The parliamentarians have “broken up” for Christmas, just like schoolchildren. It always amuses me that they have these longish breaks, very long in the summer, presumably going back to when members of parliament also had estates to run and harvests to sort out. But it makes me wonder if the country stops needing to be governed during the holidays! 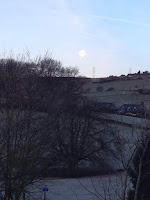 It must have been very cold on the streets last night. As I went to bed I looked out and saw the almost full moon on a clear sky. Frost was everywhere this morning as I saw the moon setting behind the village.


Coming back from my run round the village, I saw a queue outside Santa’s Grotto, incongruously situated in the middle,of the small industrial estate behind out house. I stopped to chat. The children and I agreed that maybe Santa was having a lie-in this morning as he will have a busy night tonight!

Someone on the radio yesterday was talking to small children about Father Christmas. Asked where Santa loves, one small child said, “in the big shop in town.” “How do you know?” asked the radio man. “Because I have seen him there,” came the swift and definite reply. No argument about that then.

And finally, a link to a set of pictures of houses decorated for Christmas. Some of them are a bit over the top but it is good to know that many of them do this to raise money for a range of charities.

The ghosts of Christmas past, present and future seem to have done their work.
Posted by Anthea at 06:57