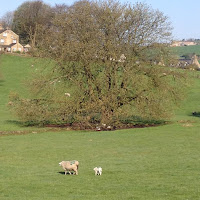 As spring, indeed quite possibly summer, appears to be here, I have spent part of today digging up dandelions from the patch of grass at the side of the house. Calling it a lawn would be an exaggeration. I would hesitate to say that the dandelions have been eradicated but there are now considerably fewer of them. As a matter of fact, when a mass of dandelions are in flower I think they can look quite fantastic. The trouble is that they go to seed and spread all over the place. So they had to go. Now the not-a-lawn looks as though it has been visited by hoards of mini-moles. All in a good cause!

Yesterday, returning from my walk, I also did a little to help reduce the crop of Japanese (or Chinese or Indonesian) balsam that grows so prolifically around here. I recognise the seed leaves on the tiny balsam plants and pull up a few as I go along my way. Not very effective, I suspect, but every little helps. This is another weed that looks very attractive but it is even more pernicious than the dandelions because it takes over so much ground that nothing else has a chance to grow. Apparently we have Queen Victoria to blame for this immigrant plant which can reduce the value of your house if it grows in your garden. Thanks, Your Majesty! 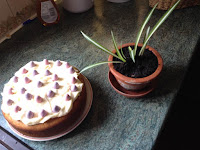 Today I have also produced a late-birthday/early-Easter cake for the granddaughter whose birthday we missed while we were away. She has also been pestering for one of the "babies" thrown out by my spider plant so today I repotted all the runners and will pass one on to her.

Yesterday I mentioned plain packaging for ready meals (no regulations yet) and cigarettes (regulations coming into force). Well, today I read that tobacco companies are getting around the regulations by putting competitive price stickers on their plain packets. The objective is to "attract cost-conscious poorer smokers". But then I suppose nobody expects tobacco companies to be truly bothered about health matters. They are in the business of making a profit after all.

Also in today's paper is yet another report on how over-use of the internet is making our young people lonely. It's not just the cyberbullying but the pressure they feel to conform to certain norms of social media behaviour. And so they can have loads of virtual friends but few real ones and a great sense of isolation. Today's report began with a statement that Facebook should come with a health warning. However, in the report I read yesterday one of the young people they interviewed said that the young do not use Facebook. Facebook, it seems, is for the older generation. The young have moved on to other stuff. What they really want is parents who actually speak to them properly. As ever, they need guidance along the way.

Nothing changes apparently!
Posted by Anthea at 09:01