A few things about language-learning!

Here is something I came across in one of the weekend papers:

"Singing in a foreign language can help you learn to speak it, according to research from the University of Edinburgh. Lead researcher Dr Karen M Ludke said: 'Melody could provide an extra cue to jog people's memories.'"

So my friend Heidy and I have been right all along. I used to get my students to sing songs in French and Spanish, having done so when I was a school-kid myself. Heidy selected tunes to go with declensions, conjugations and rules to do with word order in German. Learning lists like that with a tune meant that replaying the tune, even in your head, brought back the grammar rule. A very useful tool in a written exam situation. Less so when you need to speak the language. But singing songs in the foreign language helps you get something approaching the correct intonation.

Listening to CDs of foreign songs also helps. You find yourself singing along and learning expressions in context, sometimes only discovering later how the expression is written. When our eldest granddaughter was small and lived at our house for some time, she used to hear songs in Spanish that I played on CD in the kitchen. At three years old she was singing along nicely, totally unaware of what she was singing. Even President Trump's grandchildren are reported to be able to sing songs in Mandarin Chinese! Language classes for tiny tots should be made up of nursery rhymes and counting, clapping, repeating games. They can learn the grammar later.

In the same article I also read:

"Singing in a choir can boost the immune systems of cancer patients. A study by Tenovus Cancer Care and the Royal College of Music found that singing for just an hour boosts levels of immune proteins and reduces stress."

Join a choir that sings in a foreign language and kill two birds with one stone!

In today's newspaper I found this:

Half of young adults in the UK do not feel European, poll reveals.

Survey also finds only a third of those aged 18-30 can speak a foreign language, while a fifth do not feel British.

Here is a link to that article.

I am firmly of the opinion that a large part of the reason why so few speak a foreign language is because of decisions taken to stop making the study of a foreign language compulsory after year nine in British schools. A high percentage of those I taught in AS and A Level French and Spanish classes went on to use their language skills and consider themselves European! Learning a language makes most people more tolerant and accepting of difference. So why cut it off just at the age when young people are growing up to have their own opinions and ideas? What better way to reinforce prejudice and insularity than to say that there is no need to speak anything but English!

Other research shows that bilingual children achieve more in school. Perhaps this because their brains have been expanded by the need to learn two languages at the same time. 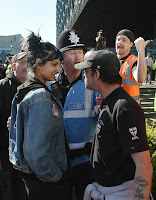 And finally, a link to an article about a young lady who stood up to the English Defence League and a picture of that young lady that went viral.

She is probably bilingual and tolerant.