On Wall Street in New York there is a statue of a charging bull. It was placed there in front of the New York Stock exchange by its creator Arturo Di Modica after the 1987 stock market crash. He installed it in the middle of the night without a permit, apparently as a symbol of America's financial resilience. The authorities wanted to remove it - after all, Di Modica never asked permission to put it there - but the public wanted it to stay and so, stay it did.

Now the artist is getting cross because another statue has been erected facing his bull. Called "Fearless Girl", the work of an art is called Kristen Visbal, it is a young girl, hands on hips, chin raised defiantly. On the eve of International Women's Day on March 7th it was placed on a traffic island near Wall Street to make a point about there being a dearth of women on the boards of the largest US corporations. She looks for all the world as though she is challenging the bull. The statue quickly became a tourist magnet. Tens of thousands of people signed a petition for the statue to stay longer and the mayor Bill de Balasio extended the permit for one year.

Arturo Di Modica is not best pleased. He says it undermines the artistic copyright of his statue. Well, maybe it does. It certainly changes the way people look at the art work. But once a work of art is out there in the world - and he wanted his work to be out there - who does the interpretation of that work of art belong to?

As for embellishing works of art, I am pretty sure I read a story about David Hockney and a friend taking pictures of statues with clothes and scarves and so on added. Or maybe I just dreamt that.

Personally, I love the image of the cheeky, defiant girl facing down the charging bull. All power to her elbow! 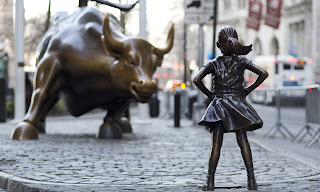 Girls need to see some positive images. I recently read that by the age of six girls are more likely to believe that boys are smarter than members of their own gender. At that age they also start to avoid games or activities said to be for "really, really smart" children. Here's a link to some information about a series of books aimed at readers aged 5 to 8, aimed at possibly combating the stereotypes.

Written by a two women, Isabel Sanchez Vegara and Lisbeth Kaiser, they tell the stories of women who followed their dreams, women such as Marie Curie, Frida Kahlo, Amelia Earhart and Coco Chanel.

I need to find some for my three year old granddaughter who has already protested about the male dominance of the hero-roles in children's stories.
Posted by Anthea at 08:48