Big boys' toys - and other games.

As a form of escapism I have been re-watching The West Wing, a world where POTUS and his employees are idealists, mostly, and talk about fairness and doing the right thing. I've seen the episode where a young doctor is killed serving with the army in the middle east and President Bartlett wants to lash out fiercely and furiously - blow them from the face of the earth - but is persuaded to take a more reasoned and muted approach. He's not perfect but he's striving for perfection and accepts that not everyone has to love him.

In the most recent episode I have seen, an (eventually unsuccessful) appeal is made for the president to intervene and prevent the execution of a convicted man. Various religious points of view come into play: Roman Catholic - Bartlett himself calling in his priest and even wanting to call the pope; Jewish - Communications Officer Toby Ziegler's rabbi preaches a sermon stating that revenge is not the Jewish way; Quaker - a deaf political advisor talks about how wrong it is to take a life.

Toby Ziegler questions his rabbi about revenge and the Jewish point of view. The Torah, he says, calls for an eye for an eye. His Rabbi responds that the Torah also says these things:

A rebellious child can be brought to the city gates and stoned to death.

Homosexuality is an abomination and punishable by death.

Men can be polygamous and slavery is acceptable.

He then comments that those were probably perfectly good rulings for the century in which they were written but not for this modern century. And I found myself thinking about religious fundamentalists, of all religions, still insisting on living by some of those old social rules.

But not only that: I also found myself thinking of President Trump responding to news of a chemical weapons attack in Syria (still not proven to have been carried out on Assad's orders) by sending American planes to bomb Syria. Even as I thought about this last night news came of massive bombs dropped on an ISIS stronghold in Afghanistan. During his campaign Trump said, "I know more about ISIS than the generals". He did not tell us how this could be so but he promised to "blow the s***t" out of ISIS.

One news report I read this morning said:

"The US had sustained an air campaign to eradicate Isis in eastern Afghanistan for more than a year, and according to Borhan Osman, an Isis expert with the Afghanistan Analysts Network, it had already been effective. “Isis was on the brink of losing their stronghold. It didn’t seem like there was a need for such a dramatic military measure,” he said."

So maybe he didn't know more than the experts after all.


Apparently those expensive bombs killed 36 activists. And frightened a lot of ordinary folk just getting on with their lives. What it makes me think of most of all is of someone who had toy soldiers as a little boy and now has the real thing to play with. Real bomb! Real targets! Real explosions! And real consequences!

End note: This is not what I was going to write about today. I had some Good Friday nostalgia in mind that will have to wait until tomorrow. I just had to get this other stuff out of the way.

And here is another approach to things. A friend of ours is currently in Jordan, working with Syrian refugees, organising chess events. Here's a photo from the newspaper La Voz de Galicia, showing a chess event by skype between Pontevedra and the refugees: 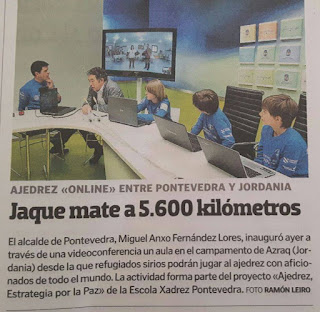