Yesterday a notice appeared on the outer door to our block of flats. It informed us that on Monday the water supply will be temporarily suspended so that work can progress on the "humanización" of our bit of Calle Aragón. This "humanización" does not imply that our street was somehow inhuman until now. "Humanización" is the term used for renovation or gentrification of an area. We did wonder if the work of replacing cables and gas pipes, and laying smart new pavements was going to stop at the traffic lights just down the road. But no, it appears that our little section of the street is also to be included in the "humanización". Quite right too! The central reservation was "humanizado" last year, with a selection of new plants and shrubs planted there, irrigated by a special system of tubes and pipes. They do things properly around here.

So the "humanización" of the section down by the breadshop must be coming close to completion. María, the bread shop weather witch, told me of her rant at the workmen. At some point on Friday she had asked when they thought they would finish. Soon, they told her. However, before they could lay the cement which goes beneath the fine granite paving stones, they still had to dig up the section beneath the bridge affair they had put up to give people could get into María's panadería. They promised to do it some time later in the day. When she shut up shop at lunchtime and went off home to eat, she suggested that then might be a good time to do the digging up. And even possibly lay the cement. In that way, as the shop is closed for a good two to two and a half hours, they could re-erect the little bridge affair and María's business would not be inconvenienced. "And, would you believe it?" she told me, "they complained". "¡Protestas! ¡Protestas!" they said to her. "Todo el mundo se queja todo el tiempo". Apparently they were fed up of complaints.

I wonder why there are complaints. After all, life has been made more interesting by the construction of a fine maze which you have to navigate in the correct manner if you want to reach the bread shop, the chemist's or the hardware shop, none of which connect with each other. As for the car repair workshop, they must have had to suspend business for the duration of the "humanización" as there is no way for cars to get through. The maze only works for pedestrians!

Bread shop María's rant was effective though. By the time she returned from lunch, the cement had been laid. There are still no smart new granite paving stones as yet but she is optimistic! And now the new pavement coming our way too.

I wonder, however, how many of the residents of the flats will see the notice. It is on the outside of the outer door to the flats. This glass door door gives access to the small vestibule where the letterboxes are situated. The lock on the door has not worked since a month or so after we moved in; nothing to do with us, I hasten to add. Consequently, the door is frequently, no, regularly, left open. Therefore any notice stuck to the outside of the door is not immediately noticeable, as it were! Some people might be surprised if they step into the shower after 8.30 am tomorrow and find that there is no water.

We walked up to A Guía in the sunshine yesterday afternoon, not along the coastal path this time, but straight up to the chapel at the top, if you can call walking up the winding road that goes round and round the promontory "straight up". At the top a group of people appeared to be videoing the view over the bay. Or else they were just very slow at taking pictures. So I got out my phone and took a quick panorama picture! 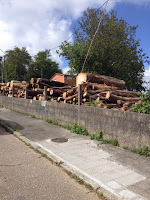 On the way down through the wooded area - another nice walk - we noticed that some places seemed clearer than usual, permitting views of the estuary that were perviously hidden. Someone appeared to have been cutting down trees. Our suspicions were confirmed when we came across a patch of land with the evidence: huge piles of mature tree trunks. I only hope that no-one is planning a new housing estate, something that often seems to happen when a patch of land is cleared. The local beauty spot is fine just as it is.

Out and about, we also spotted rubbish-container scavengers. Since the weather has improved a little I have seen several of these recently, propping bins open and poking around for something of value. They come equipped with sticks, or even those litter-picking gadgets with a sort of grabber on the end to get hold of stuff, and a trolley to carry things away in. I saw one the other day walk off triumphantly with a framed picture that someone else had discarded. When first I came across these litter-pickers I was quite horrified. It made me think of the images we see of scavengers sorting rubbish on tips in third world countries. Now, however, I have been persuaded that it is a form of recycling, although I still think is is pretty demeaning to have to carry out such activities to make a living. For I assume that some of the better stuff they scavenge ends up being sold on flea markets. It's rather a sad indictment of modern society that some of us are throwing away objects that others can still make use of or sell on to earn a living. And that those others feel the need to do so!

What I have not seen here in Spain are the charity shops that abound in most towns in the UK. Maybe they exist in some cities but I have ot seen them here in Vigo. But even poor towns in the UK have plenty of them, run by Age Concern, Oxfam, RSPCA and so on. So what do people here do with the clothes and household items that they no longer have a use for? Is this what ends up being "scavenged" from the big green rubbish containers?

What I did see yesterday was a small white van with the logo "Banco de Alimentación" on the side. This is the first evidence I have seen of food banks, apart from the queues outside the religious establishment "Hermanas del Silencio" in the centre of town. And as far as I know, they give meals to down and outs rather than providing food packages for families. Is our society taking a step back in development if we need such establishments? And they do seem to be popping up all over Europe as far as I can tell.

On a more cheerful note, yesterday was April Ist - April Fool's Day! My Italian friend Ada had everyone worried for a while as she said she had decided to apply for permanent residency in the UK. Faced with a host of surprised, concerned comments about this, she reminded us all of the date. At least she can make a joke of whole uncertain situation of EU residents in the UK!

My favourite April Fool's day news report was this one in the Guardian:

"George Osborne has reignited the row over his multiple business commitments after it emerged the former chancellor is planning to launch his own clothing line.

In a letter to the House of Commons authorities, seen by the Guardian, Osborne told the advisory committee on business appointments that his new fashion firm would design “high-quality, hi-visibility industrial garments aimed at the multitasking CEO”. His ideal client, he said, would be someone who “takes note of fashion while taking care of business”. The firm has been registered at Companies House with the name “Georgio”.

Osborne said the idea for the new range came to him during his numerous visits to factories and production lines as chancellor, when he had been forced to wear “ill-fitting and itchy” luminous tabards, unflattering hard hats and “ghastly” steel-capped boots."

I thought it was quite relevant in view of my comments about famous folk and their career plans yesterday!
Posted by Anthea at 10:24