My eldest granddaughter has been complaining to us all about the fact that the weather kept her awake all night. In fact, she probably exaggerates, as most of us do when we feel we’ve not had enough sleep. She was probably woken a couple of times because of noisy high winds, not to mention rain and hail on the skylight windows. I have suggested that maybe she should sleep in the bedroom on the first floor - smaller but quieter in stormy weather. This idea has been pooh poohed! As expected! 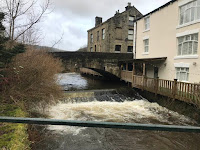 The weather is in fact quieter this morning - the various coloured warnings about Storm Franklin were due to expire at 7.00 this morning - but still rather windy. On the most exposed bit of my regular running route, where the road goes past the cricket club, I was hit by a fierce sidewind, adding an extra bit of exercise into the run, fighting not to be blown into the road. But at least I didn’t get rained on and the sun was even trying hard to get through the clouds at some points.

The River Tame is very full as it goes through the village but there seems to be no flooding … yet. 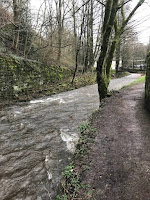 Social media has been having fun at the expense of Neil Oliver and George Galloway because of their comments on the weather. (I had no idea who Neil Oliver is and had to look him up - a Scottish television presenter and author.) It seems that both of them have been approaching storms in the same frame of mind as some people have had towards Covid restriction: basically something the strong should be able to ignore!

Neil Oliver tweeted: “I see the weather is the latest thing we’re being advised to give in to without so much as a sigh.”

And one person who supported him was politician and broadcaster George Galloway: “We’re out and about Eunice. Because we live in Britain. Because we have children to take to school, business to attend to, work to do. And because our parents faced the Blitz.”

The fact is that many schools closed early for the half term holiday so that parents did not have to send or accompany their children there in extreme conditions and that during the Blitz people didn’t generally go around ignoring air raid warnings just because they had free will. This was disregarded by both of Neil Oliver and George Galloway.

Here is a selection of reactions on the twitterfeed to their bravado:

“I, Neil Oliver. here and now CHALLENGE Hurricane Eunice to a fist fight on the 2nd floor of the Dundasvale Car Park, Glasgow G4. FREEDOM WILL BE DEFENDED."

“Get out there Neil, don’t let them tell you that you can’t Run Like the Wind, total woke mob - pull on your anorak and go whistle down the wind my friend - how dare they tell you to take cover woke wind brigade”

“Feel free to have a wander round the top of Ben Nevis in flip-flops & a Speedo just to show the weather who's boss, big man.”

“Idea for a TV show: Neil Oliver in a coracle in the middle of the Atlantic, fighting a storm with medieval swords and crossbows.”

Meanwhile all the various storms - meteorological, military and royal family - seem to have successfully drawn attention away from other problems Mr Johnson has been having. Is he hoping Partygate is over now?

But according to the Huffington Post things might be going pear-shaped for him once again, just as he plans to set us all free from restrictions, as Michael Rosen puts it:

“Dear Mogg, Spread the word: I am the bearer of great gifts: the right of every true born Englishman- freedom. Thanks to my pioneer work as the great vaccinator, today I release the population from its shackles just as Perseus released Medusa from hers.

According to HuffPost new storm is brewing, very close to home:

“Chancellor Sunak and health secretary Javid are at loggerheads over plans to scale down the availability of free Covid tests.

Javid is thought to be demanding more money from the Treasury, but Sunak is resisting.

The bust-up is hugely embarrassing for the PM, who is due to make a statement to MPs in the Commons this afternoon, followed by a press conference in the evening.”

Oh dear, we’ll have to see how that goes.

Here’s a little more kPM according to Michael Rosen’:

Can you confirm that you are holding Chris Whitty and Patrick Valance in the cellars under Trafalgar Square? Thing is, I may have to answer something about this in PMQs and I need to know the truth in order to avoid it.

“Dear Mogg, If my old pal Putin pulls back from the brink, I need you to concoct a tale of how it’s all thanks to me. I was thinking of something along the lines of the Colossus of Roads halts the Bear in its tracks.

But it’s not all bad news. At least the curling ladies saved our bacon at the Winter Olympics by pulling pit all the stops, sweeping that ice and winning us GB our one and only gold medal. The curling men had managed silver but girl power proved superior … even if only at a seriously weird and strange sport.