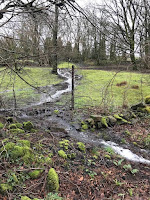 The rain continued falling all night as far as I know. It was certainly battering the house when I woke this morning.

I waited until it had stopped before venturing out. By midday we did have intermittent sunshine though.

Rivulets, ponds and mini-waterfalls have appeared in unusual places but we seem to have escaped flooding, unlike other parts of the country. 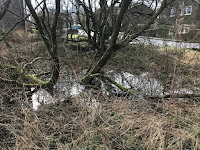 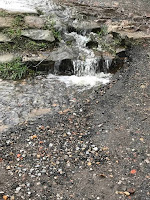 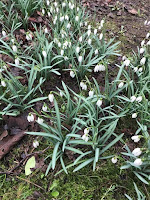 My snowdrops are doing nicely though. The weather suits them fine. Mine are just ordinary snowdrops but apparently a chap who “breeds” snowdrops has just sold a new, rare bulb for £1,850. Its posh name is Galanthus plicatus but more commonly it is called Golden Tears. Rather like dogs at Crufts, they seem to have a show name and a family name. This is not the first time Mr Snowdrop (his professional name, I suppose) has sold a new bulb for for quite a lot of money. The last one, called Golden Fleece – which took 18 years to develop – sold for £1,390. As it takes so long to develop them, I assume he makes money in other ways too. Otherwise his hourly rate is very poor. Who knew that there were so many different kinds of snowdrop? I’m just happy that mine pop up year after year. The year we moved in to this house, they even survived having a builders’ skip parked on top of them!

Some of my Italian friends are getting into a bit of a lather about the queen testing positive for Covid. They’ll be even more stressed today as the 95 year old has decided not to have any zoom meetings! My friends say are not ready for Carlo and as for Camilla, they are a bit incensed. They’re much more royalist than I am. I want to say to them, “Chi se ne frega?” - Who gives a toss?

More important things are going on. People are having to go to food banks to have enough to feed their families - people with jobs! And according to this article some of the organisations running food banks are having problems because supermarkets have complicated systems for giving away their “own brand” foodstuffs. I think it comes from agreements (or not) with the companies who make the foodstuff, and I can understand that they want to keep up their good name. Food is being thrown away. But surely a list of acceptable recipients of spare food is not impossible to concoct.

And now things are stirring further in the Ukraine. Oil and gas prices are going up further as a result. This will not help the families running short of money.