Thoughts on the summer solstice. Out and about. Relaxing things.

The summer solstice has come and gone. We have had the longest day but it will be a while yet before we start to notice a real difference. I love the long evenings but it always seems odd to me that midsummer is not the hottest day. In fact August and September are often hotter, maybe because everything has had time to warm up. Back when I was a full time teacher we used to go on holiday at the end of July or beginning of August, camping in Brittany as a rule. Again it seemed odd that the farmers had already made hay bales and were busy harvesting. Because English schools finish for summer so late, it felt to us as though summer had really only just started.

If we were in Galicia now we would be seeing everyone gearing up for the feast of Saint John on the 24th. I din’t suppose there will be any jumping over bonfires this year. I wonder if people will organise sardines cooked on a barbecue to fill the air with the smell of sardines as usual. As well as leaping over bonfires, hoping to see the person you will eventually marry, there is the collecting of specific herbs and wild flowers to make a concoction to improve your complexion. The idea is that you put the flowers in water and get up at the crack of dawn to wash your face in the flower water. I am afraid that I have always turned down the opportunity to do that. Just as I have never leapt over a bonfire.

Apparently there is also a tradition of witches (or the local youth) going round doing mischief on the eve of St John. It must be something about bonfires for we always used to have “mischief night” on the 4th of November, the night before our Guy Fawkes Night.

We seem largely to have forgotten about the feast of St John but poets, including John Dryden, have written poems about it in the past. 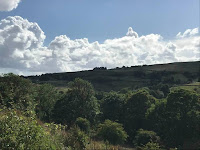 A bit of a heatwave is forecast for the next few days. We shall see. After the rainy weather of last week, it has been fine enough over the last few days to get out and about. here are some photos to prove it. 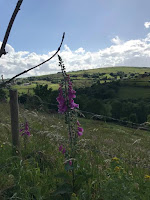 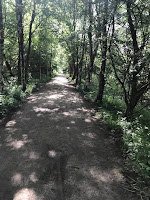 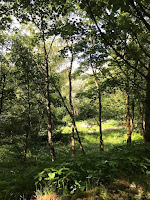 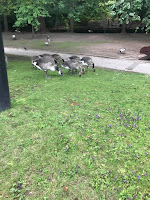 Today I cycled to my granddaughter’s house again to continue our assault on her bramble jungle. Progress has been made. We are now working on getting rid of the bramble roots and constructing a fence to prevent her neighbour’s dog from using the garden as a toilet! 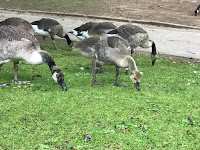 On my way home I spotted goslings in Uppermill, near the canal. As I have been avoiding canal towpaths because of the difficulty of maintaining social distance on such narrow paths, I have not seen the goslings when they were smaller. Now they are what I refer to as teenage goslings and today they were out and about pecking the grass outside the museum.

On the radio news they are discussing the gradual relaxation of the lockdown for people who received letters about shielding. Pretty soon they can meet friends and go back to work and lose their sick pay! Oh boy! And this just as Germany has a bit of a spike! Let’s wait and see how that goes.

Life goes on. Stay safe and well, everyone.
Posted by Anthea at 12:26