Will they or won’t they open? Rumours have abounded that pubs would be allowed to open beer gardens by June 22nd. As I have been out and about I have seen a number of pubs cleaning up their outdoor areas, doing a bit of sweeping and wiping off the wooden tables and chairs. But it seems that Downing Street has given the lie to all that. They want to kickstart the economy again and hospitality is an important business but no, beer gardens are not opening yet.

Which brings us to another problem: public toilets. Around here in Saddleworth old style public toilets have long since disappeared from the face of the earth. The one in our village was actually up for sale at one point. To the best of my knowledge there were no takers. The building wasn’t really big enough to be converted into anything else and presumably nobody considered it to be much of a going concern. There is still one in the park in Uppermill. It is open only intermittently at the best of times but, of course, recently it has been on serious lockdown.

One way of replacing traditional public toilets around here has been to designate certain pubs as “community toilets”, allowing people walking around the area to pop into the pub to use the facilities without having to buy a drink. It worked well until the virus came along and now that service too has been unavailable.

It’s not just a local problem either. Apparently nationwide, as people return to beaches and parks and beauty spots, taking their picnics with them, or their six-packs of beer, they find themselves needing a now non-existent loo. So people have taken to using the bushes, secluded spots in parks, quiet corners here and there. And according to Lisa Ackerley, a chartered environmental health practitioner, although one person doing it once may be harmless, on a larger scale it will inevitably start ruining public spaces. “If everybody did it in parks, there’d be nowhere to sit. People are already saying that the stench in certain places is unbearable. Then there’s the fact that people aren’t just peeing, they’re pooing – and they’re not going to be washing their hands in the park. That’s irresponsible.”

So that’s two things that remain closed. Schools might well be making number three. It seems that only one in four children returned to schools in England last week, wrecking Boris Johnson’s ambitions for a phased reopening of schools to allow parents back to work to boost the economy. And there are doubts about the much vaunted catch-up programme for the summer. The success of the “back to school” programme has varied from one country to another. Some places are accepting that it will have to wait until the next school year. Maybe this will give time for some proper planning about how to operate post-pandemic schooling. But problem of the economy remains.

The Black Lives Matters protests rumble on. In our strange media-dominated world the MP dawn Butler has received online threats as a result of defending the protests. And it’s not possible simply to ignore such mass-media comments because we have no way of knowing how serious such threats are. Free speech becomes a dangerous business!

As for me, I have had an oddly busy day. In addition to my usual morning exercise routine, I have cycled over to visit our eldest granddaughter who has been having an anxiety crisis. Sitting in her garden talking to her at a safe distance is about the limit of all I can do at present. Although I might pay another visit later in the week, weather permitting, and attack her overgrown garden.

Weather-wise, today has been following a recent pattern of being dull and gloomy for a good part of the day and then improving into the early evening. Here are a couple of pictures of our special evening light. 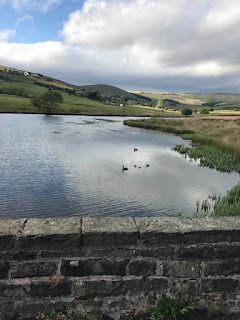 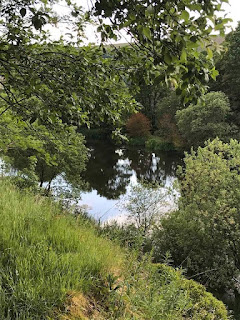 Life goes on. Stay safe and well everyone!
Posted by Anthea at 10:45