As cafes and restaurants and small independent shops worry about what the future holds for them in the weird post-lockdown time, I have come across a more positive story.

Sophie Fornairon runs an independent bookshop in Paris, La Librairie du Canal. A transplant doctor until she opened her bookshop five years ago, she believes that good booksellers are rather like doctors: they provide a therapeutic service to the community. Books, she says, “can help at times like this. They can deliver answers and provide peace. They lift you out of the everyday and away from the moment. They transport you to other worlds. They are anti-fear. But not everyone has them at home, and the libraries were shut. So I started delivering, on foot.”

She thinks that bookshops could probably have stayed open during the lockdown as they rarely get overcrowded with customers but she had to comply with the rules and regulations. And during the 55 days that France was in lockdown she delivered 2,000 packages of books to loyal customers - a mutual help system really as they kept her business going and she kept them supplied with reading matter. And her list of customers grew. And since non-essential shops have been allowed to open again inFrance she has had more customers than before the lockdown. People still seek an escape into books it seems. Will it last? Who knows?

It’s good to see a positive outcome that isn’t just some rich company getting richer from receiving the contract to provide a service that maybe the NHS could have done better. Oops! A bit of cynicism showing there.

And here is a little bit of irony! The president of the Benidorm British Businesses Association has been thinking about how to boost business again. “We want business to pick up but we don’t want another spike in the virus – it’s a question of life before business,” she said, adding that British businesses need to do more to attract Spanish tourists, such as putting their menus in Spanish as well as English. Well, that’s a nice reversal of the usual problem with menus.

But Benidorm really wants, and perhaps needs, the British back. Although around half of Benidorm’s visitors are Spanish, Baker, apparently it’s the British who spend the most money. “Spaniards will nurse a café con leche for three hours,” one commentator said. “The bottom line is Benidorm needs the Brits.”

We really have no idea of how soon tourism will be up and running again. The situation seems to change from day to day but the pessimist in me doesn’t see a return to mass tourism in the sun for a while yet. 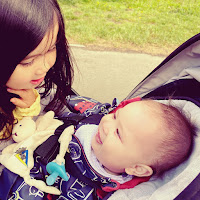 We all want to get back together with our friends and family, more than just standing, or even sitting, in a garden talking to people at a distance. Here is a picture of what reunion can look like - our two youngest grandchildren getting back together after the tiniest one spend almost two weeks in hospital. The smiles say it all.

But still, I wonder about all the hugging and kissing. Will that come back?

We have been watching “Normal People” on The television. It’s not just the scenes of people of dancing, well, jumping up and down and waving their arms around, in clubs that it’s hard to imagine after lockdown is relaxed. No, it’s all the scenes of departures and reunions, getting exam results, celebrating successes, all the things that involve lots and lots of hugging.

To some extent it’s something of a generational thing. Phil and I remarked, watching the series, that young people hug much more than our generation ever did. Mind you, we didn’t go to school to receive our exam results. They were sent to us through the post and so there was no congregation of students comparing results and getting excited or bursting into tears, both reactions leading to massive hugs.

Decades later, as a sixth form tutor I used to go and see my students as they received their results. And yes, I joined in the hugs. When I got my A-Level results, in contrast, I received a very restrained and civilised postcard from my French teacher, congratulating me on my high grade. That was it!

But our generation has changed in line with the younger people. We hug and kiss our friends and family more frequently and tell our children and grandchildren that we love them. However, most of us have still not reached the point of ending every phone call to friends with “love you!”. There are limits!

But now, as we will have to adapt to wearing face masks or face covering of some kind, as we keep our safe distance from everyone, will we ever get back to hugging and kissing? And what about those continentals with their introductions that involve two or three, depending on nationality, kisses on the cheeks? Even if those are air kisses, they will still be a bit too close for safe comfort!

But, oh dear, I am missing the social contact. As I served up a chicken dish with couscous yesterday evening I thought nostalgically of having a bunch of friends and family round the table, talking nineteen to the dozen about anything and everything. Even the fun of persuading the teenage grandchildren that they should help with the washing up is something we miss.

Life goes on. Stay safe and well, everyone.
Posted by Anthea at 05:46