Back to school? Protests! Relaxing lockdown!

Some children have gone back to primary school today but not all and not even all of those who were told they could go back. Some parents have kept their children at home in boroughs that have agreed to open schools and some boroughs have opted not to take in any more pupils than the children of key workers and those vulnerable children already there.

The warnings did not stop large numbers of people from turning out to demonstrate in support of the Americans protesting about the death of George Floyd. It’s hard to tell from the photos in the news to what extent social distancing was maintained. A friend of mine who has been shielding expressed her regret at not being able to be at the demonstration in London. Considering that she is still very vary of leaving her house, despite the declaration that the shielding people can now go out, I am not sure whether she has gone a little crazy or if this is an indication of how deeply she feels about the racism question.

Some famous people have come out and expressed their views about the George Floyd case. This from singer / songwriter Carole King:-

“I stand in solidarity with the black community in the fight against systemic racial injustice and inequality.”

And this, rather longer, from her friend and fellow singer / songwriter James Taylor.

“A time has come in our country where a significant amount of the people demand a change. We have been here before, at a time when the people spontaneously take to the streets out of a common sense of outrage. In my opinion, we have forced our societal problems into this confrontation between the police, who are tasked with keeping the peace, and a segment of our population, subjected to perpetual, institutionalized suffering. We have seen their road to freedom and equality blocked, their great struggle thwarted and stalled. We have let our leaders drop the baton. They have encouraged a backlash against what we know to be right: the inclusion of African Americans in the rights and privileges guaranteed by our constitution. In denying those constitutional rights, we have forced this failure upon our police. But the hammer sees only the nail. Of course we must rigorously police our police, that is given. But seeing this only, or even primarily, as a police failure: a problem to be fixed where the rubber meets the road, is tragically myopic. What we face is nothing less than The Great American Mission: a national commitment to ending the injustice of Slavery and a national rejection of racism...”

And their country seems to be in complete meltdown, with their president having to take refuge in the White House bunker. It’s hard for us to imagine that level of total outrage and chaos across a whole country.

And here we have our own sort of craziness, albeit of a more mundane kind. Apparently Ikea has opened 19 of its stores today and people were in traffic jams before six this morning or standing in queues in the store carparks from seven. Like this one at Warrington, where each dot is a person!! 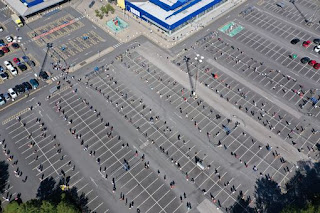 Now, I like a wander round Ikea with the best of them but the idea of standing in queues for hours and hours on a sunny Monday is really beyond the pale. I can just about understand the people who rush to the beach or parks on a sunny day but I fail to understand the appeal of queueing in the sunshine.

I came across this as well today:-

“Swimming pools in the UK could be allowed to reopen as early as July, but with drastic changes in place to try to stop the spread of coronavirus. Children will be banned outside of lessons and swimmers may have to arrive and leave in their costumes under new guidelines set to be published on 15 June.”

Going to the swimming pool in your swimsuit is one thing but the prospect of returning home in your soggy suit under your outdoor clothes is a different thing altogether, especially if this were to continue into the wintertime!

For the moment, the sun keeps shining. I note that the next-door neighbours seem to have a garden visit from another friend of their daughter, equipped with a large bag of doughnuts. That will help their waistlines!

As for me, my plan is to cycle over to see my eldest granddaughter, from a distance, standing in her garden, because she is going through a bit of an anxiety crisis just now.

And we are trying to sort out the washing machine which decided this morning that it did not want to spin the washload. So far we have mostly managed to get a lot of water on the kitchen floor. Such fun! We do have a repair contract but we are not happy at the idea of a workman coming into the house at moment.

Life goes on. Stay safe and well, everyone!
Posted by Anthea at 06:48