In a world gone more than slightly mad extreme right wing groups have had running battles with the police, supposedly “protecting” statues of famous figures from the past. In a supreme irony a man with a swastika tattooed on his chest growled out that if it were not for Winston Churchill we would all be speaking German. Just a bit confused!

There was also a photo in the news of a Black Lives Matter protester carrying away an injured right wing protestor so that he could receive first aid. Enough said.

In the attempts to be politically correct a little controversy has sprung up about the “don’t mention the war” episode of Fawlty Towers and it was removed from streaming because of racial stereotyping.

“The original broadcast included a scene in which Major Gowen, a regular guest at the hotel, uses very strong racist language in relation to an anecdote about the West Indies cricket team. A decade ago many broadcasters began editing out this part of the programme, although the racist language can still be heard on the version hosted by Netflix.
The Fawlty Towers episode in question, first shown in 1975, also features Cleese’s bigoted character apparently shocked at being treated in hospital by a black doctor.”

Surely satirising and laughing at bigoted attitudes does not condone but ridicules and condemns such attitudes and points out the wrongheadedness of holding them in the first place. Molière’s “Tartuffe” was not an attack on religion but on false piety and charlatans who used it for personal gain! Should it now be condemned as an attack on Christianity?

Nobody has yet banned “Allo! Allo!” Maybe that’s next. Or maybe someone will see sense. But sense is one of the things in short supply.

Over in Brazil, where the death toll is above 40,000, activists from a civil society group called Rio de Paz dug 100 symbolic graves on Copacabana beach before dawn on Thursday to represent the Brazilian lives lost. And then a supporter of President Jair Bolsonaro, presumably outraged at this implied criticism of their government’s handling of the crisis, went and desecrated it, overturning the symbolic crosses.

On a less pessimistic note, I read about the footpaths that people are wearing across parks and while taking short cuts over grassy areas between buildings. Rather like the sheep tracks that you see crossing farmers’ fields because the sheep always walk that way, these tracks have been worn as people have walked more frequently than they used to and have trodden a path on the grassy surfaces. Some of these are tracks parallel to the official paths in parks, for example, where people have been carefully walking two metre apart. Town planners and the like, people who study such things, have dubbed these tracks “paths of desire”.

Who knew that such planners were so poetic? 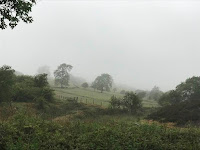 Yesterday began very mistily here with a lot of low cloud masquerading as morning mist. By midday it had all cleared and we had a fine sunny day. Our daughter brought us some washing that she had done for us in her washing machine, ours having died and still awaiting the arrival of a replacement. She had the two smallest members of the family with her and stopped for a cup of tea in the garden.

We have been planning this ever since we were told that this was permitted but we have had such a lot of rain in the last week that it really was not worth while. So yesterday we spread a blanket on the grass for the baby to sit on, we sat andhad a cup of tea and his slightly bigger sister wandered around the garden examining this and that. We had to keep reminding the small girl that she was not to get too close to us, her grandparents, demonstrating how difficult it is to do social distancing with small children.

In the midst of all this we FaceTimed our son down in Buckinghamshire. Contact established, the small granddaughter (3 years and 9 months) at our end took over. Speaking to our son’s daughter (6 years and 4 months) she first confirmed their relationship - “I am your cousin and you are my cousin!” - and then set off with her mother’s mobile phone on a tour of the garden, chatting away. So we FaceTimed our daughter in law using my phone and had an adult conversation going on.

Suddenly we had a virtual family reunion. Not as good as the real thing but the best we can do for the time being.

Life goes on. Stay safe and well, everyone.
Posted by Anthea at 05:22