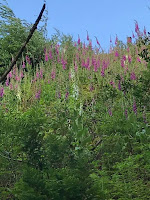 What a difference a day makes. Yesterday it was all flamboyant foxgloves against the blue sky. 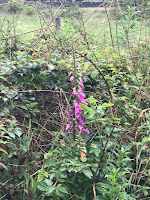 Today it’s a bedraggled digitalis in the rain. 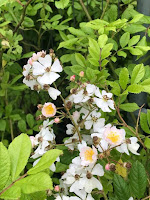 Despite forecast storms yesterday turned out to be brilliantly fine and sunny around here. I cycled over to my granddaughter’s house in the afternoon to attack the jungle of blackberry brambles which has taken over her garden, before it was her garden, when the previous occupants ignored it. Today I posted a picture of a rambling rose, prompting comments from a friend that this is the nastiest, prickliest thing to take over your garden. I should be glad, she said, that the one I photographed is on some wasteland and not in my garden. She compared it to a triffid because of it’s ability to spread, seemingly moving independently. I beg to differ! The nastiest, prickliest thing to take over your garden is the blackberry bramble. I have the scratches to prove it. I even had to dig out a thorn that had embedded itself in my finger.

The brambles send out runners which root themselves a few yards from the original, meaning that the thing is rooted in more than one place. So my granddaughter and I were busy chopping off from one end, pulling like crazy to find where the other root was and then chopping at that end. No doubt there would have been a splendid crop of blackberries later in the year but it would have been almost impossible to collect them all. We have now cleared all but one corner and amassed a pile of stuff to get rid of, a pile almost as tall as I am. All we need to do now is go over the terrain again and dig up the roots! It’s a good job it’s only a small garden.

In the middle of the evening the weather changed and we had a splendid thunderstorm. I swear I saw a lightning fork flash down into the next door garden to ours. I have been told that they pile of uprooted brambles, nettles, dock leaves, buttercups and goodness knows what else was blown over during the storm. So it goes.

After the worst of the storm had blown over the rain continued through the night. So this morning, after some hesitation, I ran in the rain.

The radio news is full of tributes to Dame Vera Lynn who has died today at the grand old age of 103. The forces’ sweetheart during World War II, she has become an icon of hope for the current crisis, so often compared to wartime in the media. Is it sceptical of me to think that if the queen had not finished her morale-raining speech to the nation with the reassurance that we’ll meet again a whole younger generation might not know who she was? The queen and Captain Tom sort of brought her back into the public eye.

It’s easy to forget people and events from the past, or even to cover them up, as with the slavery question. And if course, often it’s not the last we are unaware of but the present. John Bolton, in his recently published memoir, maintains that President Trump was unaware that the UK had nuclear weapons.

“He recalls a meeting in 2018 with the then prime minister, Theresa May, at which a British official referred to the UK as a “nuclear power”. Trump replied: “Oh, are you a nuclear power?” in a tone of voice that made Bolton believe it “was not intended as a joke”, according to a Washington Post excerpt from the book.”

And a former US official has described a similar conversation with May when Trump made a state visit to the UK in June 2019. “He told May the number one existential threat is still nuclear weapons, and not climate change or any of these other issues that all these other people were raising”. When May asked how that would affect the UK deterrent, the official said Trump appeared taken aback by the question. “In his view, this was all about the US and Russia,” the official said. “He didn’t really factor in the other countries.”

There you go! But when you think about it, most of us are pretty ignorant about life in other countries. And I don’t just mean the extremes such as the hairdresser who once asked me in all seriousness about a visit to Madrid, “Was that Madrid city or Madrid plage?” Oh boy! I suspect that we know, or think we know, more about life in the USA than the Americans do about life here, largely because we watch so many films and TV series set in the USA.

Test and trace is also featuring largely in the news today. Having announced not so long ago that we would have a world-beating system up and running in no time, the government now tells us not to expect one before the winter. And it’s not such a priority as it once was. A bit of a turn around! Now, New Zealand has had a couple of women with the virus slip through their checking system and now they are trying to contact 320 people with whom they were in close contact. Does this not suggest that we need a working system? Personally, I am not too concerned about having a “world beating” system but I would like there to be something that works. Strange times.

Life goes on. Stay safe and well, everyone!
Posted by Anthea at 06:19