Strangers (or maybe just strange people) in a strange land?

So here we are in Greece! 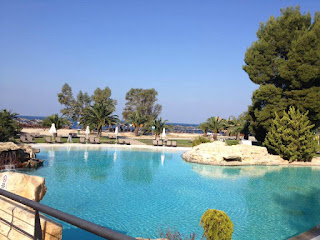 My poor fitbit is most confused about my sleep!

First impressions: as seen from the plane, it looks like a remarkably tidy country with areas of land divided into a patchwork of fields. As seen from the minibus that picked us up at Thessaloniki and brought us to Porto Carras, it seems full of olive trees, and has the same mix of half-built or tumbledown buildings and fine houses as the rest of southern Europe that we have seen.

The difference is that the signs are in a different language. And a different alphabet. Or at least some of them are. There is a huge amount of pandering to the tourist trade and much signposting in English. I kept trying to read the signs in Greek but mostly we whizzed past them too quickly. It is remarkably difficult to read upper case Greek. The capital letters are strangely more complicated than the lower case ones. I am like a small child who has just learnt to read and needs to work out the letters. Slowly! I would just have painstakingly deciphered the beginning of a word and we would be half a mile down the road!

However, I keep reminding myself to thank people in Greek. It’s the least I can do! And I managed to work out and try out a sentence on the waitress at lunchtime. And again later in one of the hotel bars, when the waiter forgot to bring us the glasses of water we had asked for to accompany our coffee, I successfully reminded him that we wanted (would like was beyond my capabilities) two glasses of water. And I asked him how much it was! A small measure of success! 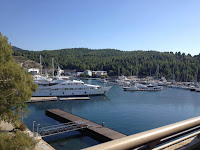 When we arrived at the hotel complex we were first dumped at the wrong hotel and had to trundle our wheelie suitcases down the road to the other one, our taxi having departed. At reception we were all given our room numbers. Everyone else in the group was ahead of us and set off, leaving us behind. Phil wondered if it might not be a good idea to have everyone’s room numbers and asked the receptionist if this was possible, as we are a group. Are you the group leader? she sternly asked, and, on discovering that this was not so, refused to comply. Oh, yes, security and all that, but we had made a group booking and had all arrived together! 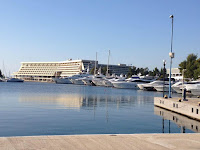 Then we had fun finding the room as the hotel is HUUUGE! Not only is it huge but there are enormous empty, carpeted areas where you could organise a barn dance or an art exhibition. Eventually we located it and discovered that it was like a furnace. And we could not fathom the air conditioning system. The next time we went near reception we asked about it, only to be told that all the air conditioning in the hotel is turned off as “it is not the season for air conditioning”!!

It must have been 25 degrees outside and considerably more in our room which had had the morning, and early afternoon, sun on it!! They promised to look into it but once we were back in the room we indulged in some choice rude words about the “air conditioning season”, as you can no doubt well imagine.

More reports of our fun and games another day!
Posted by Anthea at 01:00