According to my Fitbit I walked 16.5 kilometres yesterday. That’s 10 miles. Of course, quite a bit of that is simply moving around inside this immense hotel, getting from our room to the lifts or stairs and then covering the same distance to get to the dining room. We know a couple who we see every year at the chess tournament in Sanxenxo who rarely leave the hotel but get their exercise walking up and down the corridors. I think the wife is extremely sensitive to the sunshine. It seems rather a shame to go to a place with a fine beach to stroll along and never be able to take advantage of it. I cannot help feeling that they would really appreciate staying here.

Not all of my walking yesterday was within the hotel. Out walking around the marina in the morning I took a turn off and explored the area where there are some apartments. Beyond the apartments I found myself on a road. In one direction: exit, presumably exit from the Porto Carras complex. In the other: Kohi Kohi beach, a name I recognised. I did not want to get out onto a more major road via the exit, so I went towards the Kohi Kohi beach. 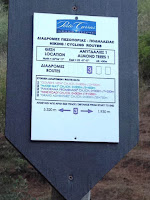 Along the way I spotted a sign which said Hiking and Cycle Routes and pointed up the hill. It was almost lunchtime and so I put off exploring until later.

After lunch, and after I had shipped Phil off to his chess game, I first went for a swim. I have no idea how far I swam but every day I have swum a little farther, sedately plodding up and down the pool, under bridges and past waterfalls and back again. And repeat. And repeat. Yesterday the weather was quite excellent. Consequently I did not feel the immediate need to be wrapped up in the hotel dressing gown and towel when I left the water. Very nice.

And for the first time I was not alone. Two Indian boys, brothers I presume, one in his early teens and then other rather younger, came and played chasing games in the water. At one point it looked as though their mother was going to join them but the boys got rather cross and made a great fuss, persuading her not to do so. What was all that about? I wondered. 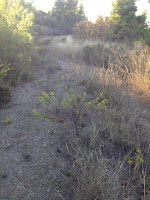 Rather later in the afternoon I set off once more to explore the so-called hiking and cycling route. I turned off the road at the signpost and set off up the hillside, already concerned that this path had not been cycled or hiked on for some time. A cyclist would need a heavy duty mountain bike. A huge number of quite tall yellow flowers, a bit like coltsfoot, grew all over the place. 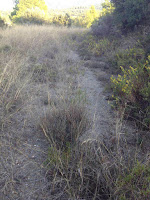 The path did not improve as I went along. Rather it grew worse. Thyme and rosemary grew wild as well. While it is quite delightful to see these herbs in flower and forming small bushes in the case of the rosemary, it did not make walking easy. I was assaulted by spiky plants from all sides. 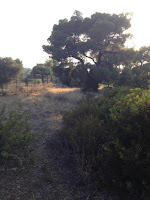 Eventually I made it to the top of the hill and wondered where the path went on to. Was there a nice beach at the end of the trail? But time was getting on and I did not fancy making my way back along the rather indistinct path if the sun started to go down. In the late afternoon light I could see the remains of the path and so long as I could see the marina and the hotel complex off to my left I was not going to get lost. 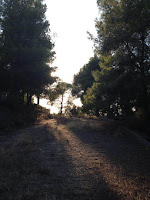 So I took a couple of photos and turned back. A little bit of an adventure? 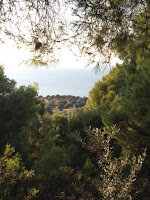 I have long been a fan of Leonard Cohen. His son has had published the last collection of poems the great man wrote before he died. It is called The Flame. Here is a link to Michael Shannon reading a poem about Kanye West.

The Leonard Cohen page where I got this included this: “Leonard often said, "There is good wine in every generation." He would surprise interviewers when he recited a few lines of lyric from a rapper or hip hop artist's latest song. Leonard appreciated music of all kinds. His son Adam believes appreciation was Leonard's intention when he wrote the poem "Kanye West Is Not Picasso," included in Leonard's new book The Flame.”

This was, of course, before we saw pictures of Kanye West hugging President Donald Trump! I wonder what Leonard would think about that.
Posted by Anthea at 05:07