Most hotels, in my experience anyway, seem to have an obsession with getting the rooms “done”. You go for breakfast and come back to find your pyjamas neatly folded on your pillow. The towels are also neatly folded in the bathroom. All very nice.

Now, when a chess event is going on in a hotel, chess players have a tendency to spend a fair amount of time in their rooms analysing games they have played and preparing strategies for the games to come. Consequently a balance has to be struck between occupying the room and getting the room “done”. And that, of course, is where the do-not-disturb notices to hang on your door come in.

Except that in this hotel the cleaning staff have a rather cavalier attitude to do-not-disturb notices. Basically they ignore them and knock on the door anyway. If they receive no immediate response they are quite likely to open the door anyway, presumably on the off-chance that you did not mean “do not disturb” at all but really meant to say “please do my room”.

Good heavens! A person could be up to any kind of shenanigans!

We have just once managed to persuade the ladies to leave our room until the following day, accepting only extra loo rolls.

It’s not just us. Others in our party tell us the same story.

Then there are the towels. In the hotel room there are notices about how they are protecting the environment by not washing towels unnecessarily. Detailed instructions tell you where to leave the towels if you feel that they need washing and where to leave them if you feel you can get another day’s use out of them. The hotel may have such a policy but the cleaning ladies have other ideas. Once they get into your room, they are going to change the towels will-nilly!

Oh boy! So much for the environment!

This hotel is also a thalassotherapy spa. Hence the sea water swimming pool. From the upper floors you can look down at the point where the sea comes into the hotel. 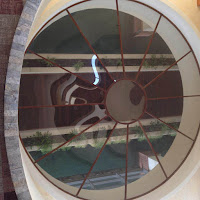 Yesterday I explored a little further up the headland. No scratchy paths that way. I followed the path for quite some distance but there seemed to be no way down to a secluded beach, just more of the same olive trees and lavender bushes. 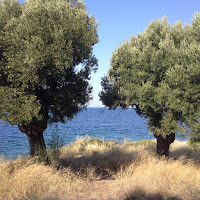 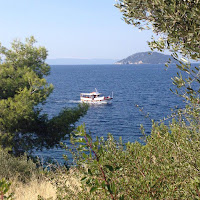 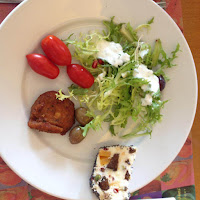 Food is interesting here. The restaurant runs a buffet service. This leads some of our party to eat huge amounts on the grounds that it’s paid for anyway! There is a mix of standard international hotel stuff and some traditional Greek dishes. I have not tried the cheese pie, cooked cheese making me feel a little queasy, but the stuffed peppers are very good. Yesterday I came across something they translated as “tomato beetles”, the brown object on the photo, rather  like a falafel but done with tomatoes instead of chickpeas.

Oh, and breakfast includes sliced grapefruit, pink and yellow, and oranges. A good way to start the day.

However the coffee has been disappointing and I now find myself on day seven without coffee. This is quite a record for me.
Posted by Anthea at 05:16