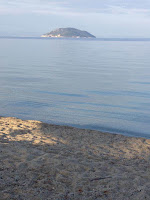 Most mornings I get up early and go for a brisk walk, not having brought my running shoes with me in order to save space in our hand luggage allowance. So there I was, feeling virtuous, when I saw someone coming up from the beach, clearly having been for an early morning dip in the sea!

Virtuous is as virtuous does! 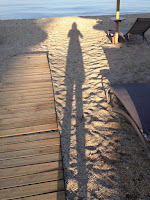 It seems that Mr and Mrs Harry Windsor are doing their royal duty and having a baby within the first year of their being married. I suppose they have the excuse of both being in their thirties and maybe feel the need to prove that they CAN reproduce. The Mirror announced it like this:-

“The Duke and Duchess of Sussex today announced that they are expecting their first child together.”

So they are “expecting their first child together”, are they? Does this imply that they have had other children separately?

“However, some people couldn't help but draw a connection with the timing of the baby's arrival and another massive change going on in the UK at the moment.”

This prompted a friend of mine to suggest that the child should be called Brexit!!

I am sure we’ll hear a lot more about this pregnancy. I hope it all goes well for them.

Our youngest grandchild has been going to play sessions at what is loosely referred to as a Forest School. This involves a lot of play activities in the open air, running around among trees and bushes, examining leaves and bugs and generally learning about nature, whatever the weather. She has been thoroughly enjoying it by all accounts. How enthusiastic everyone will be as winter sets in remains to be seen.

This is the kind of activity approved of by the National Trust. “Set your children free,” they say in their campaign to get children outdoors. “Let them feel the wind in their hair, smell food cooking on an open fire, track wild animals and eat a juicy apple straight from the tree.” Except that they seem to have changed their mind about an outdoor nursery, Forest Kindergarten, in Kent, originally granted a licence in 2014 to operate in in woods designated a “site of special scientific interest”.

The school has been judged outstanding by Ofsted but the National Trust say that the children running around in the woods are imperilling ancient trees and disturbing wildlife. As a result the licence will not be renewed What a shame!

We seem to have avoided yet another named storm by being here in Greece. Apparently Storm Leslie, or it might have been Hurricane Leslie, has been battering the west coast of the Iberian peninsula. Figurers da Foz in Portugal, a place we shall be visiting in a couple of weeks time suffered badly, with establishments in the seafront damaged and cars crushed by falling trees. I trust it will be all over and done with by the time we get there. 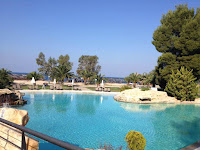 A friend of mine in Crete has been looking at my photos of Porto Carras and wondering why we have sunshine here while she does not in Crete.

I hastened to assure her that some of this is the luck of the photographer. 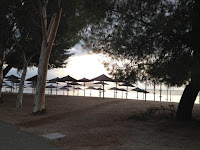 The camera may not lie (well, actually it may very well lie nowadays although I don’t know how to make that happen) but if you only take photos when the sun is shining, you can give a very favourable view of the weather where you are.

Having said that, yesterday was quite delightful! 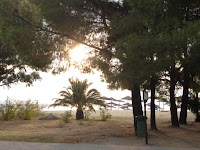 And the chess team won its match as well! All is good!
Posted by Anthea at 00:56